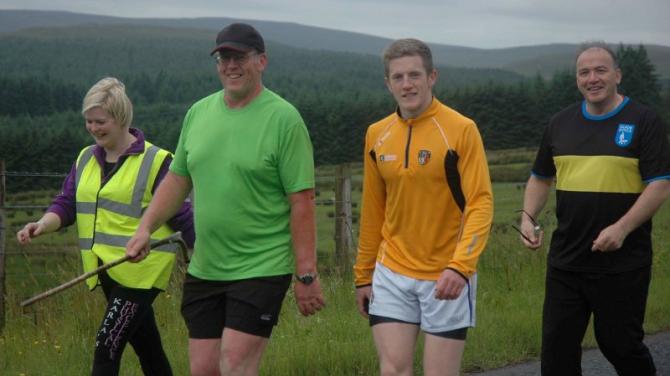 Brian Doherty is gearing up for his annual ‘The Doc’s Big Walk’ in aid of Guide Dogs Northern Ireland.

“Back about 5 years ago I said to my family ‘I’m on the waiting list for a guide dog anyway – I want to do something for other people’. I knew it was going to take some time to get a guide dog to suit me as I’m very active so my daughter suggested I do a sponsored walk as I love walking.”

Rasharkin man Brian, who has retinitis pigmentosa, has less than 10% functional vision, and says he is keenly aware that this year will be a difficult one for the third sector.

“It costs the charity over £60,000 for each dog during its lifetime.

“In our fifth year doing this walk we’ve still only raised enough for maybe half of that – which is why fundraising and awareness building is so vital, but we’ve been reaching Australia with some of our donations.”

“It started off as a one man band but my son and daughter got involved, then different people in the community, Rasharkin GAC; even from other communities and all of a sudden we had a band of walking warriors to head round the coast.

“It’s become a bit of a pilgrimage every year. We have people looking forward to it especially with lockdown this year, people have been asking for it as an excuse to get out of the house.”

This year’s walk, which begins at 11am in Cushendall on Sunday 30th August will be slightly different, with just 30 participants who must keep socially distant, and a track and trace system in place.

Brian, however, is determined that it will still be a challenge for anyone who wants to get involved.

“Because of restrictions we’ve had to chop the route it half – but don’t worry we’ve left the hard half for people so it’s still going to be a challenge over the hills.

“We should all be in to Ballycastle about 4:30pm.”

NI Community Fundraising Relationship Manager Gary Wilson says: "Over the past five years Brian has raised over £20,000 for Guide Dogs, and I am so thankful he and the community of St Mary's GAC in Rasharkin have found a way to keep it going."

Brian is excited to get going, and has been preparing for months now, with a Virtual Lap of Ireland under his belt.

“My cousin and Ihave been practicing every Sunday – sometimes up to 25 miles and we’ve been getting help from The Training Hub Cloughmills, who can’t do enough for us.

“They’ve taken us under their wing with a bit of personal training before the big walk so we can’t thank them enough.”

If you would like to support Brian’s walk and the work Guide Dogs do, you can make a donation on JustGiving at /bit.ly/TheDocsBigWalk