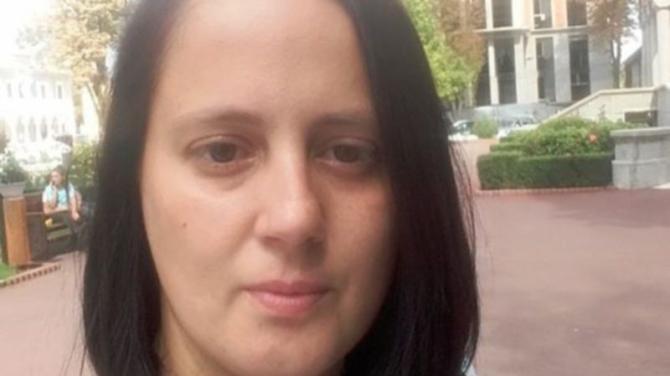 THE father of a woman from the Ballymena area who passed away this week has blamed her death on COVID 19.

Andreea Maftei (32) a familar face to many in Ballymena town centre, died on Thursday.

Her father Mircea Serban, who is from Romania, said in a social media message that Andreea was “killed by this unfortunate virus that killed hundreds of thousands of people.”

Messages of sympathy have appeared on social media.

And flowers to her memory were taped to the exterior wall of Nobel Cafe in Church Street where, it is understood, Andreea has worked for some years.

A message written beside the flowers said: ‘We’ll never forget you Andreea’.

The full (translated) text of her father’s message was: ““This is Andreea, our daughter, who today 13.08, passed among the angels killed by this miserable virus that killed hundreds of thousands of people. At only 32 years old she left us far away from the country, in Ireland on the hospital bed in Ballymena.”

Meanwhile, local people have been expressing their condolences to the family.

The death - which has not been officially confirmed as COVID related at this stage - comes during a period of increased concern in the locality as reports of infection seem to rise daily.

A number of businesses, from small shops to cafes and even retail giant Primark havbe been affected and there are fears that the area could be facing a new wave of infections.

An analysis of all COVID-19 cases across Northern Ireland by the Public Health Agency (PHA) shows that since the start of contact tracing on 24 May, a total of 11 clusters with five or more people have been identified.

In addition, there have been 20 clusters across Northern Ireland with fewer than five people.

These figures are up to 5pm on 12th August 2020. Cases in a smaller cluster may also be associated with a larger cluster, for example a common geographic location or common social setting.

The PHA will be publishing cluster data on a weekly basis each Thursday until further notice.

A cluster is currently defined as two or more laboratory-confirmed cases of COVID-19 among individuals associated with a key setting, with illness onset dates within a 14 day period.

Key settings which have seen clusters to date since May include workplaces, retail or hospitality premises, domestic gatherings, and sporting settings.

COVID-19 transmission risk is highest in a household setting, and it is to be anticipated that a significant number of linked cases within households will be identified by efficient contact tracing. It is for this reason that household-linked cases are not reported as clusters.