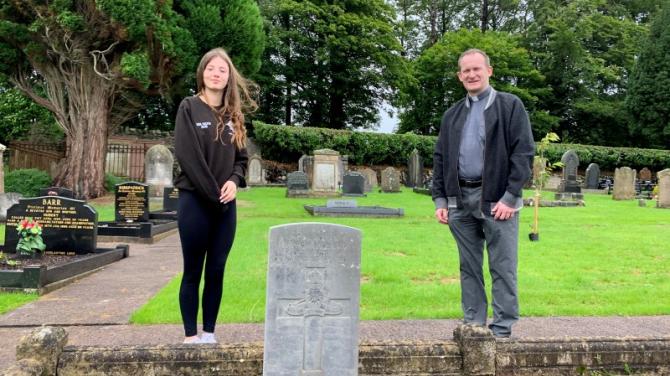 August 15 2020 is the 75th anniversary of VJ Day, marking both the surrender of Japan and the end of the Second World War. Two

To recognise those who served the British Legion had asked The Army Cadet Force to shine the spotlight on stories of British and Commonwealth Tri-Services, highlighting the forgotten history of those who fought in the 1939-45 conflict.

Local Cadet Lance Corporal Alicia McGorrey decided to research the story of Gunner John McIlroy Foster who served in the Far East and is buried in the local Craigs Parish Church, Cullybackey.

Alicia recalls visiting the grave to start her research, she said: “I noticed the headstone had become difficult to read and thought as a fitting tribute I would to clean it to help keep his memory alive”.

The Curate in charge of Craigs, Dunaghy and Killagan has himself paid tribute to the soldier in the recent VE Day (Victory in Europe) celebrations and with the church yard being the final resting place for both WW1 and WW2 soldiers has helped the cadets in various other research projects.

Whilst VE Day marked the end of the war in Europe in May 1945 many thousands of Armed Forces personnel were still involved in bitter fighting in the Far East.

Victory over Japan would come at a heavier price for Gunner John McIlroy Foster as he made the ultimate sacrifice, his life.

Here is his story:-

John McIlroy Foster was born on the 14th November 1907 and was the son of Mary Foster of Patrick Place Ballymena.

His mother went on to marry William Kernohan of Moyasset, Ahoghill in Wellington Street Presbyterian Church on October 5, 1918.

He was a gunner in the 261st Battery, 94th Heavy Anti-Aircraft Regiment in the Royal Artillery.

At the outbreak of war the 94th HAA Regiment was serving under 36th HAA Brigade and was mobilized at Edinburgh. On 7 March 1940, 228th Battery was deployed to defend Aberdeen.

It was sent to the desert war zone and served under 12th AA Brigade in the rear areas of the front.

It remained under the brigade in the desert campaign from November 1941 until January 1943, when it transferred from a short period to 2nd AA Brigade in the Tripoli area.

It returned to 12th AA Brigade by May 1943 under 8th Army. It then remained in the Middle East, including Palestine and Egypt.

The 261st Battery saw action at El Alamein and would have been in North Africa when Foster’s life ended on 10th January 1944 aged 36. Military records state he died in the UK and the fact he is buried in Cullybackey suggests he possibly died from old wounds.

The war ended that day for this Royal Artillery solider and his colleagues of the 94th HAA Regt were place in suspended animation on 26 July 1944, however fighting still continued in the Far East until Japan’s surrender on the15th August 1945.