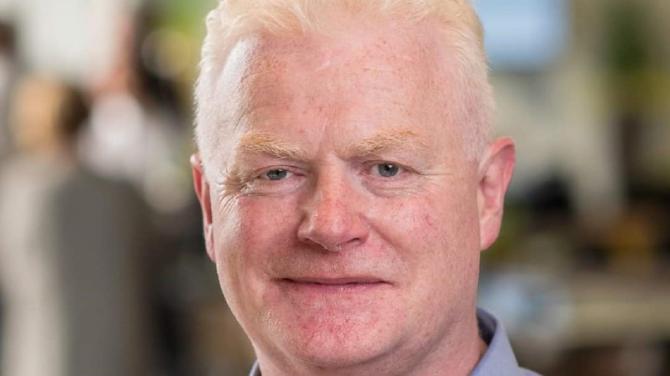 BALLYMENA man James Gault left school in an era when the digital communications technology we enjoy today was still largely in the realm of science fiction.

Back in 1983 the household phone was still central to our lives and the very thought that most people in the first world would be capable of personal global video reach from a five inch oblong object which slotted into the back pocket of their jeans, would have prompted comparisons to 'Star Trek'.

But the slow trek towards digital dominance would gather pace in the coming years, reaching breakneck speed in the late 90s and early 2000s as the potential of the internet, broadband and worldwide web became fully apparent.

James has witnessed first-hand the telecommunications industry evolution right through this exciting period and now is a BT Director visioning the exciting world of being able to stay continuously connected through 5G or Fibre.

During his 30 year career with BT, James has played a major role in the business and community life of all the UK’s regions and nations – enabling BT to launch products and services in around 180 countries.

The Guardian asked the former Cambridge House pupil to look back on some career highpoints and asked him for his thoughts on the future.

And he pinpointed the year 2000 as a lamdmark in terms of digital potential starting to become reality.

James recalls: “The exciting launch of Broadband at the turn of the millennium got everyone excited with speeds of 256kB and 512kB which today we would all struggle to survive!

“And of course we had the drama of the non-existent ‘millennium bug’ that was supposed to cause worldwide chaos!”

Despite his career long experience in the industry, the progress he has witnessed still amazes the Ballymena man.

“You have to stand back and put the whole thing in perspective. We have witnessed the growth in technology and mobile handsets where we have reached and surpassed the point where your iphone/android device has 500 times the computing power that took the Neil Armstrong the Apollo 11 team to the moon.”

James picks out his personal career highpoints on local and global levels.

In Northern Ireland he was closely involbved in the establishment of BT’s Belfast IT Centre at Riverside Tower.

And he expanded that capability by creating a Development Centre in Bangalore where BT now employs more than 13000 software engineers supporting its Networks and products.

He says: “Today BT is at the forefront of innovation enabling the UK and global organisations to exploit BT’s Fibre and 5G to create augmented Reality services like ‘Connected Remote worker’ and ‘Remote diagnostics’ on health care which will benefit greatly benefit us as we look to the “New Normal” post the COVID-19 pandemic.

“The Pandemic - and particularly the period of strict lockdown - allowed the public to really appreciate and get creative with the digital offering.

“People learned how to do things online which they would have been frightened to touch before. Digital kept the world entertained and informed.

“It allowed families to interact in a manner which would have been unthinkable just a few short years ago.

“Putting aside the anorak technology which is quite amazing, you can say that the humble phone was at the heart of a home revolution.

“It’s a good feeeling when you know that you and your teams have played a small part in that,” said James.

Just prior to COVID, James was excited to help host the annual BT Ireland Young scientist competition down at the RDS in Dublin where he was introduced on stage by world renowned Professor Brian Cox.

“You can imagine that he was a hard act to follow,” recalls James.

“Thankfully presenting to the next generation on Telecommunication is as a good topic as you can hope for to keep the attention of the audience - especially after Prof Cox’s thrilling presentation on whether we could be the only planet with intelligent life in our galaxy!”

At this event each year James always follows the success of local schools and he has been delighhted to see some past winners there from Ballymena.

As well as serving BT James enjoys: DYI, Badminton, Gardening and following the football fortunes of Manchester United among his hobbies.

He recalls how during his time at Cambridge House his beloved ManU were very much in the doldrums.

He laughs: “Thankfully that all changed when Sir Alex started at Old Trafford which was the same month that I joined BT!”

James & his family continue to live in the Ballyclare area and is very thankful for all the support of his devoted wife, Liz. He is also pleased his three children have completed their education and all working and no longer on his payroll!

His Mum (Evelyn Gault) stills lives in the family home near Clough where he grew up and James really appreciates the support that his parents gave him throughout his own education at Cambridge House and UU, Jordanstown and early work life and he returns very week to help maintain the home garden there.

Another arrest in murder probe