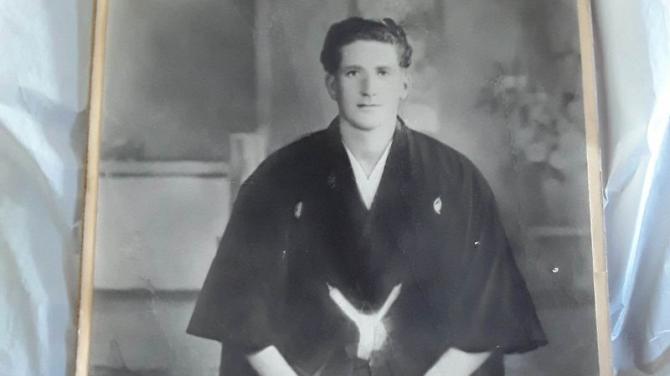 A Ballymena woman, now living in Scotland, has been recalling the role played by her father during the aftermath of the first Atomic Bomb attack in history, 75 years ago.

After the devastation caused by the bombing of Hiroshima and Nagasaki, 40,000 British and Commonwealth troops were posted to Japan to help support the US occupation and reconstruction effort.

Among them was Tom Clarke from Ballymena and his daughter Sandra gave the Guardian access to her collection of photographs of her father and spoke about his memories to mark this sombre anniversary.

Sandra, who lives in the village of Lundin Links on the coast of Fife, still keeps in contact with her old friends locally via social media.

“Dad was born to Joseph and Jeannie Clarke nee woodcock at Clonavon Place.

“He must have been a character in his earky years because he ran away to Belfast at 16 to try and join the RAF, but he said they gave him a good kick in the backside and and sent him home,” laughs Sandra.

Eventually Tom met the selection criteria and joined the RAF, subsequently being posted as groundcrew to the Far East where he served in Burma, India and Japan.

“My dad was fiercely, proud of his time in RAF. He valued the comradeship and the friends he made during times of hardship far away from home.

“I suppose that’s why he took so much interest in the Burma Star Association in later years. He could talk with people who’d been out in the South East Asia theatre and who had experienced similar things.”

When Tom was quizzed by his prooud daughter about his role in the war he often preferred to joke about his experiences.

“I asked my dad how many planes he had shot down but I remember him saying the closest he got to flying, was laying in bottom of flat bellied boat going into Hong Kong harbour!

“Lots of servicemen ended up with bad illnesses out in the Far East and Dad was no exception.

“I remember him telling me how he suddenly took sick in the street. He had to throw up and it was then that his false teeth came out and fell into the stream of filthy water which was running down the alley.

“He had to chase after them and give them a rinse off - he was never going to get replacments in India during the war!”

But it was in the immediate aftermath of the conflict that Tom became one of a very small number of British servicemen to be posted to the Japanese mainland to help with the clean-up of the devastated cities.

With the prospect of terrible losses in any military invasion of Japan, the decision had been taken to unleash the Atomic Bombs in a bid to force the Japanese into surrender.

The United States detonated two nuclear weapons over the Japanese cities of Hiroshima and Nagasaki on August 6 and 9, 1945, respectively, with the consent of the United Kingdom. The two bombings killed between 129,000 and 226,000 people and remain the only uses of nuclear weapons in armed conflict.

Tom received a medal for working in the zones but rarely talked about the more distressing experiences.

“He would just say that the whole city had been wiped out. He - and no-one else - had ever seen anthing like it,” says Sandra. “You can only imagine the kind of things he saw.”

“My dad was a chronic asthmatic and I remember, after he died, a woman came to see me. They were trying to see if there was any link about ex-servicemen with chest problems and whether it was related to working in areas,that were contaminated after the bomb.

“As a wee girl about 10, I can remember people in the house, were discussing what they would like to inherit.

“I wanted my dad’s medals. He was very proud of me taking an interest so he made it his job looking to see any medals he should have had. So he always used to phone me saying I’ve got you another medal - he actually got another 4 medals,which were commemorative only.”

Sandra looked set to follow in her father’s footsteps but her initial attempt ended in failure!

“ I asked at 17 for my dad to sign my papers to join WRAF, but he refused, only for me to join QARANC 20 years later.”

Sandra’s memories of her father also revolve around musicianship.

“I asked him one day what would you like to be remembered for and he said his love of music.

“He played the trumpet all his life and was in the Silver Band with his brothers Joe and James and their cousins the Woodcocks.

“He had a little dance band in the early 1950s ,I remember them playing in the green hut down Harryville Park.”

Footnote: Japan surrendered to the Allies on August 15, six days after the Soviet Union's declaration of war and the bombing of Nagasaki. The Japanese government signed the instrument of surrender on September 2 in Tokyo Bay, which effectively ended World War II.