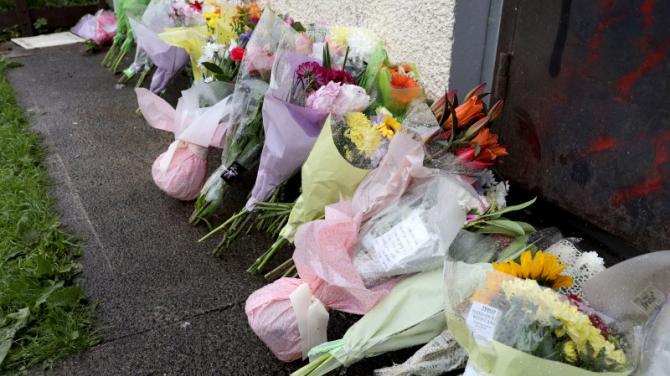 ONLY one word can sum up the mood of local people in the wake of the murder of Jason Martin in Ballykeel at the weekend.

Heartbroken is that word and in these days of textspeak it is also the icon which is most widely - and poignantly - used in relation to the passing of a hugely popular young man who was very much a part of the close knit community.

And perhaps the depth of feeling is best illustrated by the immense response to a 'just giving' page set up to help the family with funeral expenses.

What started as a target of £1000 was passed in very short order and the current figure (at time of going to press) was approaching the £8,500 mark with many still pledging to make a contribution whenever they can.

The estate's residents awoke to the terrible news that Jason - a father of two boys - had lost his life in a stabbing incident at a house in Orkney Drive in the early hours of Saturday morning.

The sense of shock was palpable as post after post on social media expressed horror at the devastating news.

Perhaps the most widely used tribute to the local man was 'no-one had a bad word to say about him' which would serve as a fitting epitaph for someone who was also described as the 'life and soul' of his family.

Floral tributes were left at the front of the house where he was killed. The house itself was shuttered and firmly locked.

Among the memorial items left at the scene was a Liverpool scarf denoting Jason's lifelong support for the Anfield team.

Numerous people recorded how delighted he had been to see his favourites clinch their first Premier League title only last week.

Jason’s sister Jamie Leigh poured her heart out in a touching online tribute in which she also expressed the family’s thanks for the wave of support which had engulfed them.

She wrote: “No words will ever explain the heartbreak our whole family is going through right now.

“We are so humbled by everyone’s messages and calls. They haven’t gone unnoticed, we’re just trying to get our heads around this awful ordeal that has happened.

“I am not sure how life is going to be without him. He was the life and soul of this family and I just wish I could have him back to annoy me again! I would give anything.

“Not 1 person had a bad word to say about my brother. We are hurt and angry right now! The next few days are going to be unbearable but we have so many people around us to help get us through and the memories we will always have of the big edjit. Wish I would have told you more that I love you.”

The Rev. Martin McNeely of Ballykeel Presbyterian Church called for prayers for the family.

In a statement issued through Rev McNeely, the Martin family said:

“Following the tragic passing of Jason Martin early on Saturday morning, Angela and the family circle would like to thank the community of Ballykeel for their support at this difficult time.

“They also wish to underline that Jason’s passing was in no way linked to recent disturbances within the community.

Dr McNeely commented: “The community are shellshocked by Jason’s passing. He was the life and soul of so many people’s lives, not least his children.

“It’s hard to find words to describe the pain people feel. It hasn’t sunk in. Our prayer must be that God will give our community hope in this time of great grieving and loss.”

Rev. McNeely will conduct Jason’s funeral on Thursday (details below) He said: “Jason’s passing is devastating. He really was a funny lad from a well loved family and a huge circle of friends. He absolutely adored his two sons.

“Ballykeel estate has suffered blows of repeated suffering. I know I speak on behalf of Pastor Thomas Todd and local community representatives in expressing our hope that Jason’s death must mark a turning point in the estate.

“As it is, I have been talking with a number of individuals, including my own elders, about establishing a better vision for young men in south Ballymena.

“We must be resolved to give hope and provide role models for our young people.

“For now, and for the months to come, I would be grateful if people could pray for Jason’s mum, sisters, his two boys and all the family."

They wrote on social media: ‘Jason Martin was a truly wonderful lad who was a key member of the only Riverdale side to gain promotion and play in Division One.

“A sad and tragic loss, which will have hit and hurt a lot of the population in Ballymena this morning.”

Chimney Corner FC in Antrim said: ‘Chimney Corner FC would like to pass on our deepest sympathy to the family and friends of Jason Martin who sadly passed away last night. Jason was a former player of the club. Our thoughts and prayers are with you all at this very difficult time.’

Local independent councillor, Rodney Quigley posted: ‘Waking up this morning to the sad news of another young Ballykeel man’s life taken too soon. I’d like to express my deepest sympathy to the Martin family circle at this heartbreaking time. My thoughts and prayers are with you all.’

Ballykeel Loyal Sons of Ulster Band said Jason was a former member and added: “Jason was a popular figure within the Ballykeel estate, had family still current members of the band and also friends within the band. Jason was someone many people had a lot of time for.

“Our thoughts and prayers go out to his family, his friends and his 2 little boys who have now been left without a Daddy. Ballykeel will always remember.”