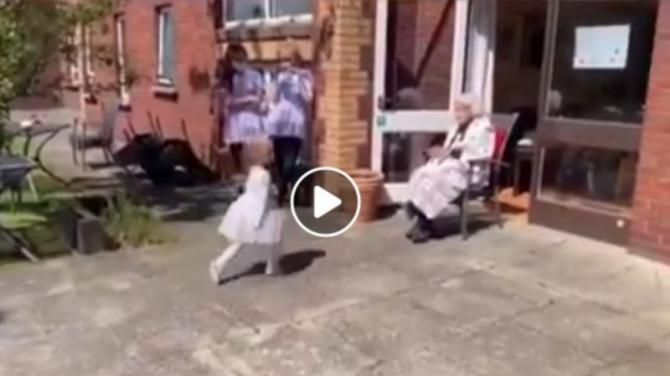 A heartwarming video which shows local Irish dancers paying tribute to a former teacher of the twinkle toed art has gone viral.

More than 100,000 people around the world have now viewed the delightful video after it was first posted last month.

It shows youngsters from the Nine Glens of Irish Dancing performing some traditional jigs and reels for Ballymena woman, Mrs. Mary Carey who celebrated her 100th birthday at Kintullagh Private Nursing Home in the town on June 11.

Mary, who was an Irish Dancing teacher herself, was delighted when the Nine Glens School Of Irish Dance performed and helped to make the celebrations on the day.

Spokesperson for the school of Irish dance, Edith McNeill said: “We as the Nine Glens School of Dance in Ballymena were extremely privileged to honour Mrs Carey on her special day. She dances at the end herself which is such an inspiration!

“What a truly amazing lady she is. When we asked her what was her favourite memory of her 100 years, she told us it was her Irish Dancing and how fit it has always kept her and that she is delighted to have passed her skills and love of dance down through the generations

In attendance were Abbie, Sophie, Cara and Zara.

Mary’s son Michael said the Carey family were overwhlemed by such a warm response from so many friends from around the world.