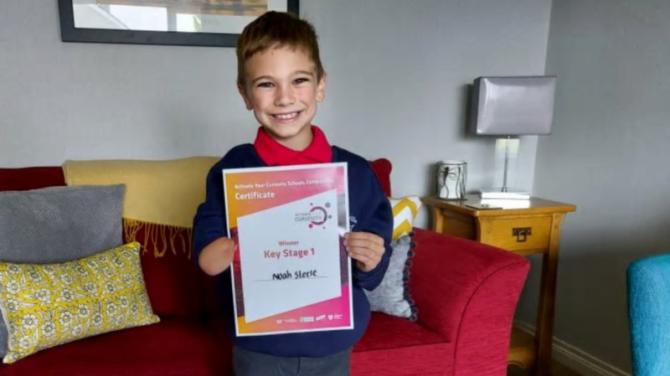 A Ballymena school boy’s idea for a prosthetic arm inspired by his favourite superhero, has scooped the Overall Winning Design title in Mid and East Antrim Borough Council’s ‘Activate Your Curiosity’ competition!

Noah Steele’s innovative concept would see the arm equipped with a range of interchangeable attachments, just like the Avengers’ Ant Man, and would be the ‘world’s first mind controlled robot arm’.

Noah was born with part of his right arm missing and said he wanted to create ‘something special’ for children and adults like him.

In his submission, the Harryville Primary School pupil, said:

“There are lots of other children like me and I have even met some. I know there are also adults like me and adults who have lost their arms in accidents or in wars.

“I want to make something special for all of us. Everyone will be able to have their own arm.”

As part of the first Northern Ireland Brian Cox Science Summer School – which takes place in November – Council had challenged local school children to ‘Activate Your Curiosity’ by designing an innovative idea that could improve lives – and we were bowled over by the standard of the entries!

Noah’s idea will be displayed alongside the other creations in the Gallery of First Attempts at The Braid Museum in Ballymena, when the ACTIVATE YOUR CURIOSITY Making Sense of Science event gets underway later this year.

Mayor of Mid and East Antrim, Cllr Peter Johnston, congratulated Noah and all the other winners.

“Well done to Noah Steele on his amazing, award-winning idea! I was so impressed by his design, and by his consideration for helping others who face similar difficulties. He should be very proud of himself!

“Innovation and creativity are essential to the pursuit of science and the associated subjects, and I look forward to seeing Noah’s winning idea and all the other entries displayed in the Gallery of First Attempts when we welcome Professor Brian Cox OBE to Ballymena in November.”

“We were delighted to sponsor Council’s Activate Your Curiosity competition, which received many innovative and creative entries from young people of all ages.

"Science, Technology, Engineering, and Mathematics (STEM) skills are vitally important for the Future of Work and the future of the Northern Ireland economy. We are keen to support initiatives that promote careers using these skillsets to young people, who are the innovators, engineers, and problem-solvers of tomorrow.

"If the quality and creativity shown by Noah and his fellow competition entrants are anything to go by, our future STEM capabilities are in good hands.”

The winners in the Activate Your Curiosity Competition are as follows: