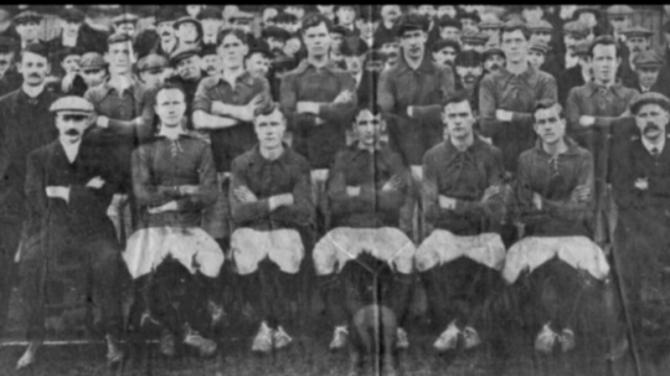 By the time of the 1911 Irish census the couple had been married for thirty-one years and had had nine children, all of whom were still alive at that time.

Robert, Hugh, Jane, Margaret (Maggie), John, Agnes, Samuel, Elizabeth (Lizzie) and James had lived at Rocavan, Rathkenny and Killygore, their father working as a grocer at the time of the latter.

The family had, however, abandoned the depths of rural Co Antrim and moved into ‘the town’, Ballymena, about the turn of the century, their address on the 1901 and 1911 census returns being 57, Moat Road, Harryville, Ballymena.

They had moved a short distance by 1914 and were found at 9, Larne Street, Harryville. Robert (Snr.) was working as a general labourer and most of the children were employed in a linen weaving factory; Hugh and John had chosen different paths: Hugh was a hairdresser and John was a shoemaker in the employ of Mr Thomas Kerr, Boot & Shoe Maker, Church Street, Ballymena.

Shoemaker John had adapted well to urban life. He was a talented and noted footballer, a stalwart of South End Rangers FC.

He played, for example, in the semi-finals of the Irish Junior Cup at Ballymena on the 17th February 1911 and helped his team defeat Queen's Park Swifts FC, and then he played in the final against Séipéal Iosóid, Chapelizod, a team from outside Dublin, at Grosvenor Park, Belfast on the 11th March that year.

The importance of the match as seen at that time was reflected in the fact that the Great Northern Railway offered Dublin fans a special ticket price of 6s-6d (32 ½ pence) for those attending the game.

The final brought together a large number of opposing fans and two very closely matched teams. However, in the tense, thrilling and toughly contested game, Chapelizod had the edge.

They were 1-0 up at the interval, and despite an unrelenting effort by South End Rangers in the second half, the Chapelizod defence was a ‘regular stonewall’ and the Ballymena men were beaten.

John McNabney went on to play the occasional game for Cliftonville FC, but the real change in his life came with the outbreak of the war in August 1914: John and his brother Samuel, about 25 and 20 years old respectively, joined the Royal Engineers in Belfast on the same day, 22nd September 1914.

They were given consecutive service numbers, 57836 and 57837. Both were to serve throughout the war and both were to survive the experience.

John had signed the Ulster Covenant and was already serving in the ranks of Carson’s Ulster Volunteer Force, his name appearing on a membership roll of 1st February 1913 listing for ‘North End’, Ballymena, part of Mid-Antrim UVF.

He appears to have been a key figure in the local section of the Signalling and Dispatch Riders Corps, his specialism signalling.

He and his UVF colleagues were indeed using a new-style signalling lamp of an advanced type not yet adopted by the British Army, and the UVF had many men who were literate in semaphore.

He went to France and Flanders in October 1915 (1914 volunteers were filtering into the battle zones by autumn 1915 to early spring 1916), was to rise through the ranks by learning and prowess to become Acting Sergeant, and his record shows had never committed offences whilst in the army; neither, indeed, did his brother Samuel.

This is not really surprising. He was a superb soldier - intelligent, conscientious and brave.

His gallantry was first recognised when he was given a 36th Ulster Division Parchment Certificate, his award being posted on the 30 June 1917.

These certificates were given after April 1917 for actions after the 1st July 1916, the opening day of the Somme battle.

His record of bravery continued with a Mentioned in Despatches (MID), with it recorded in an entry in the Second Supplement to London Gazette, Issue 3077, Friday, 18 May 1917, page 1.

It reads: ‘The following is a continuation of Sir Douglas Haig's Despatch of 9th April, submitting names deserving of special mention’.

This first part was published in the London Gazette of Tuesday, 15th May, 1917 and on the identified page, page 4880 of the later document, it lists ‘McNabney No. 57836 Corporal (acting Serjt.) J’.

Elsewhere it was stated thus: The following despatch has been received by the Secretary of State for War from Field Marshal Sir Douglas Haig G.C.B., C. in C. of the British Armies in France, GHQ, 9th April 1917:

‘Sir -mI have the honour to submit a list of names of those officers, ladies, non commissioned officers & men serving, or who have served, under my command whose distinguished and gallant service and devotion to duty I consider deserving of special mention....’ McNabney’s name is amongst those that follow.

He won a Military Medal, the award published and gazetted on March 12, 1918, but there is no record of the deed for which it was given.

However, a second award, a ‘Bar’, was soon to follow. In the London Gazette, Issue 30873, 26th August 1918 and on page 10110 it says, ‘His Majesty the King has been graciously pleased to approve the award of a bar to the Military Medal to the undermentioned Non-commissioned Officers and Men’, and on page 100112 it lists the following: ‘57836 Cpl. (A/Sjt.) J. McNabney M.M. R.E. (Ballymena).’ The Ballymena Observer greeted the honour and stated,

‘Sergeant J. McNabney, Royal Engineers, Ulster Division, whose relatives reside at 9, Larne Street, Ballymena, has been awarded a ‘bar’ to the Military medal. Sgt. McNabney is well known in football circles and will be remembered as a popular player for South End Rangers Prior to enlisting in August 1914 he was in the employment of Mr. Thomas Kerr, boot and shoe manufacturer, Church Street, Ballymena. His brother Pte. S. McNabney is also serving with the Engineers.’

McNabney’s remorseless endeavour and devotion to duty saw him approach the actions in the final days of the war, the so-called 'Hundred Days’, with the same raw bravery and determination that he had exhibited earlier.

This was to win him the prestigious Distinguished Conduct Medal, a medal won by only about 25,000 men amongst the hundreds of thousands who served in the Great War.

The citation, published in the London Gazette, 10 Jan 1920, Page 448, states that 57836 Sgt J. McNabney, M.M. 36th Division Signal Company, Royal Engineers (Ballymena) got the medal because ‘in the Dadizeele sector, during the fighting from 28th September to 5th October 1918, this NCO was constantly out repairing lines under heavy shell fire and it was chiefly due to his courage and fearlessness that communication was maintained.

On the 2nd October he went out accompanied by another NCO and remained out during a very heavy barrage, maintaining communication during the enemy counter attack.’

57836 John McNabney is Ballymena’s most decorated soldier of the Great War. His sheer efficiency as a soldier, his raw unflinching bravery, made him very special. It is appropriate that we still remember him and honour his courage, as the British Army did at the time.

Samuel McNabney, who we noted earlier also served in the Royal Engineers during the Great War, and his wife Agnes, still of Ballymena, lost their son in the Second World War. Twenty-year-old 164928 Pilot Officer (Air Bomber) Samuel McNabney of 7th Squadron Royal Air Force Volunteer Reserve (Pathfinders) was killed on the 8 August 1944. He is buried in Bolbec Communal Cemetery, France.

His aircraft took off from RAF Oakington, Cambridgeshire at 10.05 pm on the evening of the 7th August, part of a group of 1019 planes that was to bomb five targets ahead of ground forces. 660 were able to do so.

His aircraft, Lancaster ND460, was shot down by night fighters between 11:39 pm and 12:06 am. In 1946 investigators questioned available eyewitnesses including a Mr. M. Revault. He said the 4-engined bomber crossed low over Bolbec and was on fire.

It partly disintegrated in the air, the wreckage covering an area of about 1000 square metres. One falling engine hit a house and killed a young French woman and her child.

The largest part of the burning fuselage crashed onto a hilltop on the edge of the town. There were no survivors. Mr. Revault indicated that six charred bodies were recovered but they were not able to identify individuals apart from Samuel McNabney.

His body still had his ID discs. The aircraft service number was painted on a piece of the wreckage and this further identified the aircraft and crew.

You can read more stories of the role played by men and women from Ballymena and district on the excellent website ‘Ballymena and the Great War’ from which this superbly researched article was sourced.