Make some connections folks - try these quiztastic brainteasers on the family! 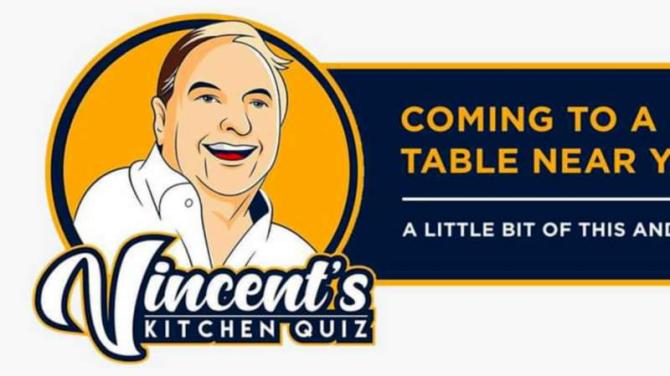 So, when COVID reared its ugly head, Vincent put on his thinking cap and came up with a thoroughly modern method of reaching out to the thousands of quiz afficianados out there in cyber land.

Thanks to Facebook and digitial technology, Vincent’s quizzes ‘from his kitchen table’ have become a huge local and global hit with social media users.

They gather eagerly for a regular helping of fun, facts and fantastic craic with quizzes usually held at 9pm on Thursday, Friday and Saturday evenings.

Vincent has kindly sent us some of his favourite quiz questions for use in print.

On with the show:-

The Horned Goat, 23 degrees 26 mins south and a 1978 movie about a hoax Mars landing

Buddy, a Venezuelan waterfall and Gabriel

Battle of Waterloo, New Zealand, and a pie

A French military leader, Animal Farm and a Cognac

A pig, stealing the limelight and TV weatherman Phil Connors

A fixed dental restoration, a card game and Sydney Harbour

Denim jeans, the Confederate States Army and the JFK Assassination

A Spice, the rock band Cream and Fred Astaire

A Robin Hood movie, a Mark Twain novel and Sinead O’Connor’s 1990 No1 hit

An Anglo Irish Chemist & Physicist, Trainspotting and Britain’s Got Talent

Clint Eastwood, One Direction and an American Illusionist & Escapologist

Battle of Trafalgar, the African National Congress and a three times Formula 1 Champion

Texas, the youngest ever US Open ladies singles champion and The Bionic Man

An English Highwayman, a 1968 High Jump Gold Medalist and the 46th Vice President of the US

Botticelli, a planet and an American Tennis Player

A dwarf planet Ronan God of the underworld and Mickey Mouse

A small edible fruit, the father of Rock’ n’ Roll and the Best Actress 2001

A British Professional boxer, rockers U2 and an Israelite leader

A 19 year old female chart topper in 1978, Mount Horeb and a former US President and governor of Texas

A weekly New York City based news magazine, Greenwich and Dark Side of The Moon

What connects a barometer, Farrokh Bulsara and the smallest planet in our solar system

What connects the capital of the USA, an American Film Studio and a fatal space shuttle disaster.