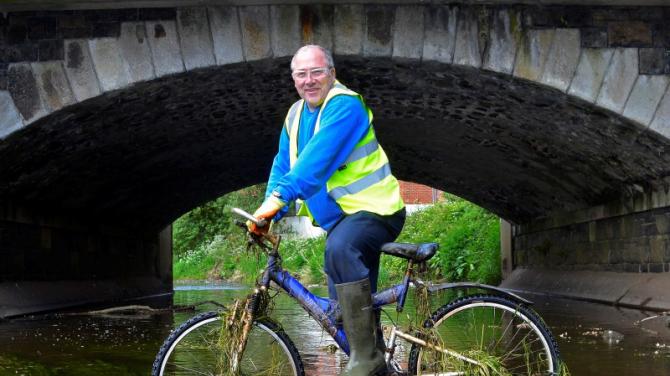 A Ballymena councillor who has a long history of ‘hands-on’ environmental clean-up work says it is time to treat the urban stretches of the Braid River with respect.

Rodney Quigley, an Independent councillor with close links to the south Ballymena area in particular has been taking part in ‘trolley collections’ at the Braid for many years.

But he says that his most recent river round-up left him feeling saddened - and quite angry.

“We’ve got a great riverbank experience running through our town and if it was respected by the community and those who have premises along its length then it has fantastic potential,” he says.

Having grown up in the era when the river was dominated by the huge red brick edifice of the Braidwater Mill, Rodney points out that its path is more exposed to public view than ever.

“When you look back, it was pretty much enclosed space from McNinch Footbridge to Harryville Bridge.

“People had no reason to be in that area unless they were mill workers.

“Nowadays we have great views right along this section and I personally feel that there has to be a joined up approach to making full use of this fantastic potential.

“With the opening of the retail park it has now opened the area up to everyone and the nature and beauty around the river with wildlife such as swans, ducks, otters, kingfishers and other wildlife regularly seen on the stretch from Sainsbury’s down to Harryville bridge,” he said.

But he acknowledges that not not everyone will see the beauty associated with the area.

“There will always be some who will still treat it as a dumping ground and continue to put the wildlife and the environment at risk by dumping their refuse into the river.

“These people need to be told in no uncertain terms that this will not be lolerated by the local community - we have the ability to impose fines on those who continually flaunt regulations and I would call for such monetary penalties to be used more frequently.”

But Rodney beleives the real driving force behind the naural rejuvenation of the area must comes as a united push.

“ I feel that the authorities responsible for this area and the retail park owner have to take seriously the issues associated with this stretch of water and listen to the concerns of the community groups and members of the public who regularly use the pathways around the river for daily exercise.

“My opinion is that things weren’t thought through properly at the outset and the environmental issues weren’t taken into account when the retail park was being planned.

“The aim now should be to preserve the beauty of this stretch of the river Braid and that means taking steps to make sure this happens.”