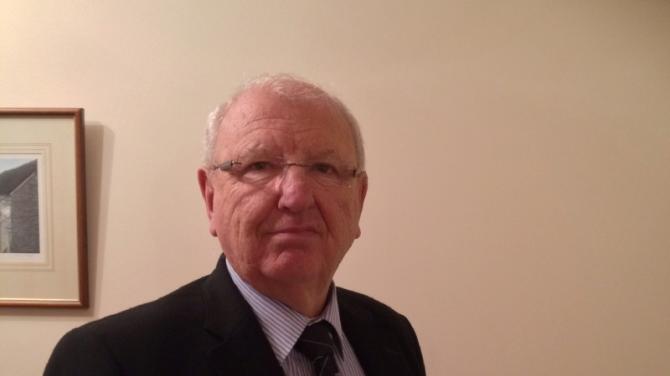 Bill, of Redford Road, originally hailed from Londonderry, and grew up in a small post war pre-fab with his parents and the family of his mother’s sister in the same house.

He won a scholarship to Foyle College, where he excelled academically and captained the First XV rugby side.

From Foyle College he won a place at Queens University a year early where he studied classics and, of course, played rugby.

While in Armagh he married Sylvia.

First and only Boys’ Principal

He went on to become the first, and only, headmaster of Cambridge House Boys’ Grammar School.

He retired when the Boys’ and Girls’ schools merged, leaving the former with a very good reputation.

Bill didn’t sit still in retirement, and worked in developing and assessing prospective headmasters all over the Province and ended up good friends with many of them.

Many thought of Bill as their mentor.

The Board of Directors of Ballymena RFC, on behalf of everyone connected with the club, recently extended their sincere condolences to all who mourn Bill’s passing.

Bill served on various Committees in a number of roles, over many years.

At one time he was working on improving the BRFC website; he also provided match reports from the Firsts to the Ballymena Guardian.

“Rugby was a massive part of his life and not just because of enjoyment of the sport, but because of the values of teamwork, camaraderie and friendship that go with it. He had many long standing valuable friendships through rugby,” said a BRFC spokesman.

But above all Bill was a family man and took no greater pleasure in life than spending time with his son and daughter – preferably watching rugby somewhere! And he adored his four grandchildren, Lucy (21) and James (19) and Daisy (6) and Louie (4).

He was at his happiest surrounded by family with good food and good wine.

Past pupils of Cambridge House Boys’ have summed up the man who will always be ‘Mr. Wallace’ to them as a fair man who led the school through its formative years with dedication and patience.

Ballymena Guardian Editor, Dessie Blackadder was one of the very first batch of pupils through the doors at Cambridge House Boys’ School.

“In fact, our group did first year in the Girls’ School and in 1974 we moved across with the incoming first years to the ‘boys’ side’ as it was known.

“Mr. Wallace and Mr. Guy McCullough were the head and deputy head with a small staff of teachers in a brand new school environment.

“My memory of Mr. Wallace will always be associated with him teaching Latin to a class of young lads who had no idea of just how useful the subject actually would be in terms of language derivation in later years!”

Bill, of Redford Road, was the dearly loved father of John and Suzie, grandfather of Lucy, James, Daisy and Louie.

He passed away on Friday, April 24.

Due to current circumstances the house and funeral were strictly private. Donations were in lieu to the local foodbank.