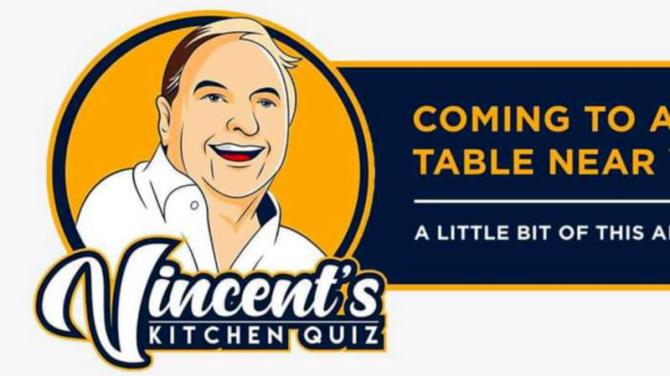 So, when COVID reared its ugly head, Vincent put on his thinking cap and came up with a thoroughly modern method of reaching out to the thousands of quiz afficianados out there in cyber land.

Thanks to Facebook and digitial technology, Vincent’s quizzes ‘from his kitchen table’ have become a huge local and global hit with social media users.

They gather eagerly for a regular helping of fun, facts and fantastic craic with quizzes usually held at 9pm on Thursday, Friday and Saturday evenings.

Vincent has kindly sent us some of his favourite quiz questions for use in print.

On with the show:-

1. What links - a Cathedral City, the 16th US President and Ford’s Luxury Car Division?

4. What links an American processed Food & Snack Co, an American singer songwriter who died in 2017 and Tony Blair’s spokesman and campaign manager?

5. What links a battle in ,1815 Britain’s busiest railway station and a winning Eurovision song?

6. What links a city in North Carolina, Jane Eyre and a Welsh singer songwriter who first hit the headlines as a classical singer?

7. What links the 39th US President, the highest point scorer in test match rugby history and a Michael Caine movie?

8. What links a swallow like bird, Gulliver’s Travels and an American singer songwriter who had the best selling US album of 2009.

9. What links an Arab Kingdom, a Scottish Footballer who scored in three World Cups and a former American Professional Basketball player?

10. What links the first shots of the American Civil War, the capital of West Virginia and a 1920’s dance?