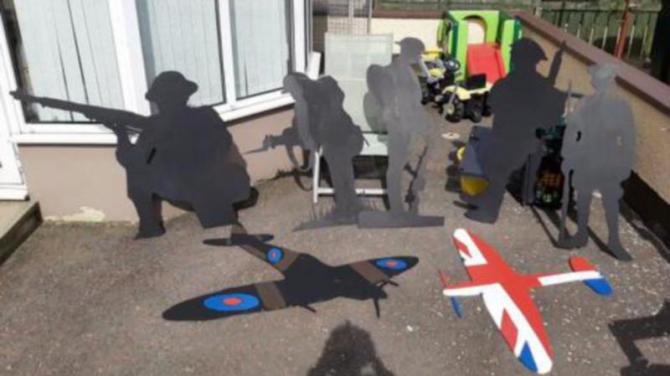 AMBITIOUS plans for a special community celebration in Ballykeel to mark the 75th anniversary of VE day have had to drastically re-scaled.

Ballykeel 1 Moving Forward community group had hoped to combine the best elements of a party with some great historical insights into the local connection of what became known as 'the people's war'.

But that was before the restriction rules imposed due to the COVID19 outbreak.

However, group members Pat and Jean Rainey remained determined to mark VE day which stands for 'Victory in Europe' when the Allies completed the task of defeating Nazi Germany.

To that end, the pair have been busily making materials for a special VE day wall mural to be placed on a wall overlooking Crebilly Road just opposite the entrance to Tesco.

Jean said: “The victory came after six long years of war and at a terrible human cost.

"We wanted to blend in some enjoyable activities for our young people with some historical education - the sacrifices made in the Second World War cannot be forgotten - but COVID19 scuppered those plans.

"We had organised WW2 era costumes and a special exhibition featuring photographs of many of the men and women from the local area who played their part in the conflict.”

Now, members of the group will hold a ‘socially distanced’ commemoration when the new VE mural is completed on Friday, May 8 at 12.30pm.