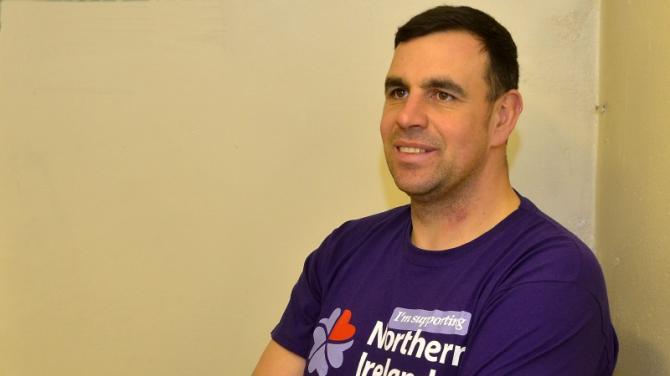 FEBRUARY - it's the month when New Year's resolutions begin to slip into memory and bad habits start to creep back into our lives.

Only two weeks ago it was revealed that one in three local people can be classified as 'obese' - that runs from your standard 'spare tyre' to fully fledged and dangerous levels of body fat.

Mid and East Antrim Council have been promoting a health and well-being programme for some time now so who better to talk us through just what it takes to lose weight and change your lifestyle than the imposing figure of Alderman Stewart McDonald?

EVERYONE who is carrying more weight than they are happy with has a moment when they realise that it isn't just going to drop off by magic.

Stewart McDonald reckons a Christmas present set him off on his personal campaign to 'fight the flab'.

"If you asked me what really made me want to lose weight then I'd take you back to the start of last year when I tried to put on a new shirt my wife had bought me for Christmas. As per usual, I'd tucked into the usual holiday grub and you can guess the result. The shirt wouldn't even button and I knew that something had to be done," he says.

But you can't blame excess weight on one season of being jolly and, looking back through his life experience, Stewart can trace how he piled on the pounds.

Now 37, the Ahoghill man weighs in at six feet three inches and 18 stone 11lbs. Back in June last year he was 21 stone 11lbs and , he freely admits, probably set to put on even more weight.

However, it wasn't always that way.

Stewart attended Fourtowns Primary and Cullybackey College and, while he was taller than the average pupil - "I was a big lanky stick" - it was not until the age of 16 that he seemed to sprout up to his current height.

And when he turned 16, Stewart entered the world of work as an apprentice joiner under the tutelage of Alan Darragh ("great pigeon man") and Robert Greer. It's a trade he still works in and takes great pride in to this day.

But it also exposed him to the traditional eating culture which was - and is - part and parcel of that trade.

"On an average day you could start early with a 10-piece fry, probably washed down with a big bottle of fizzy drink.

“You'd be scoffing a chocolate bar or crisps at 11am and then it was lunchtime - by that time I’d eaten the guts of 3000 calories! I never really ate much for lunch but I knew other boys on sites who would be getting tucked into a sausage supper with gravy over it. By the middle of the afternoon you might want another bar of chocolate - just to tide you over to teatime," he laughs.

And what did tea consist of in the young McDonald's household?

"Nothing fancy, just what you'd expect in any local home. But I have to admit I would have finished off a big plate! Don't even mention the evening time when you might knock more biscuits and mineral into you.”

On a rough calculation, Stewart could have been touching the terifying heights of 5000 calories a day- a good 2000 more than the recommended daily allowance for a man involved in an ‘active job’.

Like all fit young men Stewart was of the mistaken belief that he could eat whatever he wanted, whenever he felt like it. And that problem only got worse when he passed his test at the age of 22.

"Growing up, everyone around our place was very active. We played football in the morning, breaktime and football in the evening. We were always on the go. We walked or ran everywhere - then I got a car and that was a big downfall,” he explains.

It became all too easy to jump in the car and scoot into town for a takeaway meal and for Stewart, the top choice was a ‘Number 3’ from Harryville’s Papa’s Kitchen.

“Loved it far too much,” he says. “My favourite takeaway grub of all time. I could have eaten them to a band playing!”

Having a car gave Stewart the lazy option and he exploited it to the hilt.

“I wouldn’t have walked the length of myself,” he admits. “You don’t half pile on the weight when you get behind the wheel. That should be stamped on your driving licence!”

Throughout his life, Stewart had been a keen footballer and his frame and height made him ideal for goalkeeping.

“I kept goal for Ahoghill Thistle for years,” he says.

But surely the rigours of football training helped him keep fit and trim?

“I’d say I train harder now than I did when I was in my 20s and doing nets,” he laughs. “The outfield boys worked a lot harder than I did at training so while it did keep me relatively active it was never making up for the energy drinks, chocolate, crisps and general junk food I was eating,” he explains.

In 2008, Stewart took over the managerial role at Thistle and, more importantly, he managed to convince wife Julie to marry him.

Stewart’s sneaky takeaway trips were curtailed but, like all young couples, he and Julie enjoyed a nice dinner for two.

“Only problem is I could have eaten for both of us,” laughs Stewart. “If you had set me down a big sirloin with chips and lashings of pepper sauce I’d have gorbed it in a couple of minutes!

“Combine that with a starter and a big desert washed down with fizzy drinks - I really loved food.”

It was when children came along that the Ahoghill man began to consider his lifestyle more seriously.

“The boys are six and three now and just full of energy. Just keeping up with them takes some doing,” he says.

“I’d started to feel podgy and I have to admit I was fed up trying to get clothes to fit me.

“It can be a blow to your self esteem when you can’t wear the clothes you want. It wasn’t that I was massive for my height, it was just the slow and steady gain in weight. I knew I had to do something about it,”

But knowing and doing are two different things and Stewart was still at the stage where the diet would always start tomorrow.

“You’d be thinking about going away on holiday and saying to yourself that it was time to cut down and get in shape - but it never happened. I’m sure that is the same with most people,” he says.

But it was the festive gift that wouldn’t fit that really set Stewart on the road to a healthier lifestyle.

“It didn’t happen overnight,” he says. “I would start and then slide back. It wasn’t until June of last year that I joined the Slimming World class in Ahoghill. Elizabeth Cooke was a great motivator along with all the other people in the class.

“I changed my eating habits by cutting out the junk food and the fizzy drinks. I also realised that I had to work on portion control. When you start to see results it gives you the push to keep going but it does take willpower - especially when you walk into any shop and the sweets , crisps and minerals are cheaper to buy in a multi-pack than they are as a single item.

“In the Council we are committed to providing opportunities for our people to live a healthier lifestyle but that can only start at home with people eating in moderation and keeping themselves active. The sugars we consume are killing our society through illnesses like diabetes and heart disease. That’s what I’ve come to learn since I started on my personal programme.

“If I had advice to give I would tell any younger person to change their eating habits earlier rather than later. As you get older, the process just gets tougher.”

So what are the main components in Stewart’s current diet?

“I eat a lot of rice, chicken and fresh fruit - where I would have eaten crisps or biscuits as a snack in the past I would now eat a raw carrot or a handful of grapes.

“I suppose the motto should be ‘eat less and move more’!”