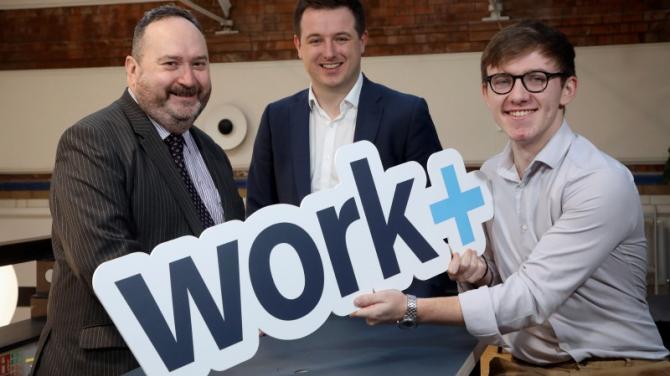 A former Ballymena Academy pupil has given his backing to an ambitious new apprenticeship campaign.

Workplus has announced that it has created 120 apprenticeship opportunities with 28 employers in Northern Ireland and applications are now open.

Matthew Taggart, 20, who is in the first year of a foundation degree apprenticeship in Civil and Environmental Engineering at Translink in Belfast, said he believes the opportunity to gain qualifications with no fees while getting paid to work is something that all young people should consider.

Workplus, which helps employers develop talent through apprenticeships, estimates that almost £8m will be earned by the successful candidates over the period of their apprenticeships, some of which will last up to six years, with the possibility of permanent jobs.

Those successful will take up positions at companies including Farrans, Translink, Atkins, Liberty IT, Jacobs and McAdam Design in the autumn to gain on the job training in career areas including engineering, construction, IT, administration and accountancy.

Matthew said: “After my AS Levels at Ballymena Academy I went straight into a Workplus apprenticeship with Translink and spent two years doing a Level 3 BTEC.

“Now I’m in the first year of a foundation degree, working on projects at Translink which are both interesting and challenging four days a week and attending classes at South West College in Omagh one day a week.

“The greatest benefit of being an apprentice is that I’m able to work and learn on the job, while also working towards the qualifications I need to apply for jobs within the industry.

“Some of my friends who are at university wish they’d taken the same path as me because I’m earning a wage and as my fees are being paid I’ll have no debt at the end. I’d recommend that all young people considering higher education take a look at the apprenticeship opportunities available with Workplus.”

Gavin McFarland, Programme Manager at Translink, said: “Workplus gives us access to a large pool of talented young people. Our Civil Engineering apprentices are valued members of our Infrastructure and Projects team. They take full advantage of opportunities to develop their academic learning and professional qualifications, while earning an attractive salary. We are pleased to support Workplus and would recommend it to other employers seeking to attract talented young people. “Richard Kirk, Director of Workplus, explained: “Many of the young people who are applying for Workplus Apprenticeships are telling us that full time study along with the debt and career uncertainty at the end is not the right route for them.

“Our apprentices get real jobs, good pay with a starting salary between £13,500 to £19,000 depending on entry level, as well as access to training and professional networks that will transform their lives.”

Applications for this year’s Workplus scheme are open until February 28 at www.workplus.app