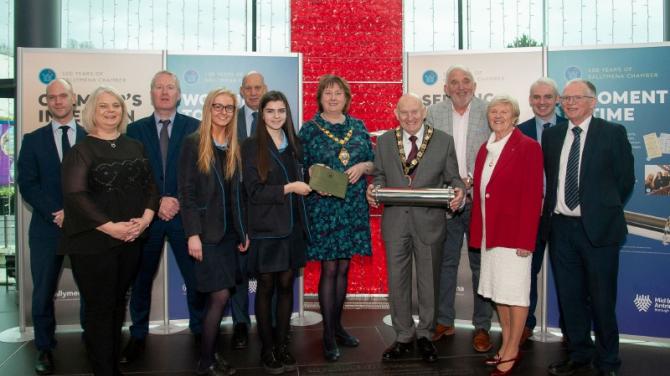 A time capsule, created by the Ballymena Area Chamber of Commerce, has been officially sealed for 25 years at a special reception hosted by the Mayor.

The Chamber has celebrated this momentous anniversary with a number of events, throughout the year.

To further mark this milestone, the Chamber created a ‘time capsule’ to be opened in 2044.

As part of the project local schools were invited to join a competition to place materials in the capsule.

Pupils from St Louis won and were allowed to place materials in the capsule including a Prospectus for St. Louis Grammar School and other literature on school life in 2019.

Materials relating to the work of the Chamber were also placed inside the capsule, including a list of Chamber members, formation of the Management Committee, events presented this year by the Chamber and literature relating to the 2019 Ballymena Business Excellence Awards.

Ian Aiken, Tax Assist Accountants also placed materials in the capsule which showed how tax was calculated and paid by businesses both in 1919 and 2019.

Mayor of Mid and East Antrim, Councillor Maureen Morrow hosted a Mayor’s reception to officially seal the capsule and present the prize to the winning school – St. Louis Grammar School.

The competition supported by Council ran during October and November as the finale of the Chamber’s Centennial Year. The aim of the competition was to encourage the next generation to think about working life in Ballymena in twenty- five years’ time, when the time capsule will be opened.

The special event was also attended by other representatives of Ballymena Chamber’s Management Committee. Emily and Aoife outlined how they came up with their winning suggestions of what should be contained in the Chamber’s time capsule.

The Mayor congratulated the winning pupils while giving them their prize including tickets for a ‘Harry Potter’ themed tea kindly donated by Galgorm Spa and Golf Resort.

She commended their innovative ideas, and noted that we are already living through a period of unprecedented change in how we work and live with many new opportunities emerging as well as challenges. The Mayor also presented Ballymena Area Chamber of Commerce and Industry with a specially commissioned certificate to mark their 100th Anniversary.

Ballymena Chamber President, Alderman Robin Cherry MBE thanked the Mayor for hosting the reception and thanked both Phil Brunt the project manager and Council for their assistance with bringing the project to fruition.

Robin added: “Over the past 100 years many members of the local business community have given their time freely to manage and organise the Chamber of Commerce. Their efforts ensured that Chamber was in a position to help sustain and grow business in the Ballymena Area. Chamber membership continues to grow and I trust that the contents of our time capsule will give our members in the future an insight into how Chamber worked in 2019 to promote and assist our member’s businesses.

“The input from St. Louis will also give an insight into school life and how it prepared young people for their future careers.”

Robin then presented Mrs Devlin with an engraved plaque to mark St Louis success in their time capsule competition. At the conclusion of the reception the silver time capsule was officially sealed by the Chamber President and presented to the Mayor for safe keeping.

It will be on display at The Braid for the month of December, alongside an exhibition on the establishment and current work of Ballymena Area Chamber of Commerce and Industry.