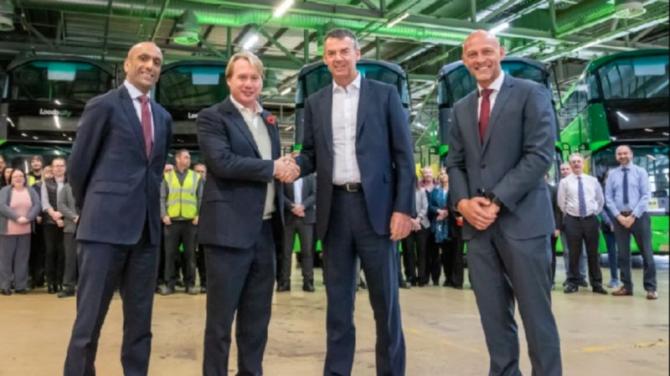 There was a glorious sight in Galgorm last week as the first new fleet of buses left the Wrightbus factory following the company's acquisition last month by new owners Bamford Bus Company.

36 buses out of an order of 55 were delivered to First Group for use in Leeds. The overall deal is worth about £13million.

New chief executive Buta Atwal said the delivery was “a clear signal of our intent to drive forward the Wrightbus business and grow the company.

The positive sign comes after 1,200 lost their jobs when the company was placed into administration, before a takeover deal was done between the Wright family and new owner Jo Bamford, who will serve as Wrightbus' executive chairman.

This delivery is certainly a sign that at least some staff are getting back to work, but there is still a question mark over how many will be retained by the new owner, Jo Bamford. A “full production line” is expected to be in operation early in the new year.

MP Ian Paisley, who was involved in negotiating the takeover deal by the Bamford company welcomed the news of the new buses and the prospect of employment returning to the factory.

He told the Guardian: “I am delighted by the very positive news.

“Last week Mr Bamford briefed me on this development and I believe this is the first foundation for more jobs and more orders going forward.

“I look forward to seeing many more positive developments following the Bamford investment.”

The company is currently recruiting for roles like engineers, technicians and project managers, with new job listings being posted on their website, however it's not yet clear what size and composition of workforce Mr Bamford requires for his future plans.

Local recruitment agencies Grafton and Industrial Temps have been appointed to assist in the speed of the process, moving to a comprehensive recruitment campaign for permanent contracts.

Wrightbus is currently recruiting for a range of production roles including coachbuilders, welders, paint prep and spray painters.

In addition to these roles, Wrightbus acknowledges the importance of new technologies and people engagement in moving the company forward, so getting the right IT and HR talent will be essential.

Wrightbus will also be launching an engineering recruitment campaign. This will be phased over the next few months with job advertisements already going live and successful candidates receiving phased start dates during late November, December, January and February 2020.

Buta Atwal, Wrightbus Chief Executive said: “In the near future it is not likely that the company will employ as many people as it did before it entered administration earlier this year. Over the longer term, it is of course our ambition to rebuild the company and ensure that Wrightbus is as big and successful as possible.

For further information regarding any of these roles, please view vacancies via http://www.wrightsgroup.com/