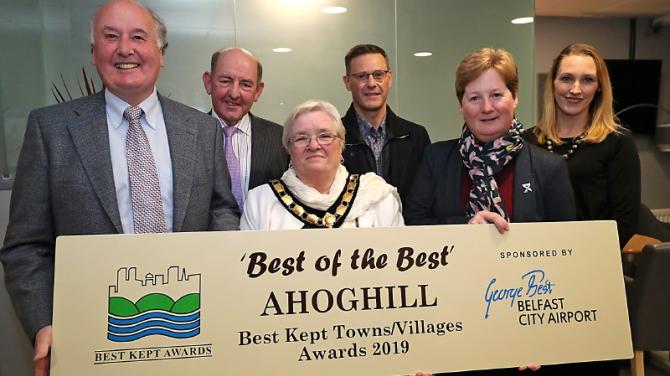 An evening of celebration was held in Ahoghill recently to mark the completion of the Village Renewal Programme which has seen the completion of a major regeneration scheme in the Diamond including the installation of a new civic pillar clock.

The villagers were also celebrating Ahoghill winning ‘Best Kept Large Village’ as well as the overall ‘Best of the Best’ accolade.

As a result, Ahoghill has reached the final stages of the 2020 All Ireland Tidy Town competition.

The event was held in the Coaching for Christ building in the Diamond which was packed to capacity with representatives from organisations across the community. Deputy Mayor Cllr Beth Adger paid tribute to the team of volunteers who have achieved such success in recent years.

Speaking on behalf of the volunteers, Wallace Elder paid tribute to all those who support the environmental improvement programme, including Council officers.

James Perry thanked all those who continue to support by way of financial contributions. Members of Ahoghill Young Farmers Club were thanked for their very generous contribution to the Ahoghill in Bloom programme.

Everyone present enjoyed a delicious supper prepared by BLM Bakery in the village. A cake was cut by John Small, Mid and East Antrim in Bloom Volunteer of the Year and Mrs Iris Elder, wife of the 'in bloom' team leader.

A great night was had by all as the people of Ahoghill, young and not so young, celebrated all of the village's achievements in 2019.'