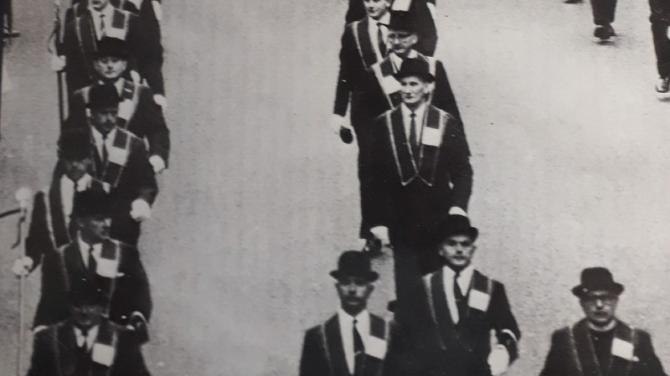 THIS grainy, monochrome picture of bowler hatted members of the Apprentice Boys on parade arguably marks the day that the troubles really started.

It depicts members of the Cullybackey Club of the ABOD on the march in the centre of Londonderry just a matter of minutes before mass rioting broke out when an attack was launched on the marchers from the staunchly nationalist Bogside area.

The picture was kindly provided to us by Slatt man Roy Sampson who can be seen rear left of the picture carrying the Club’s ‘deacon pole’.

Roy can still vividly remember the tension in the air as he, then a 25-year-old, took part in the parade.

It had been a summer of increasing division right across Northern Ireland but the simmering pot well and truly boiled over on August 12, 1969.

There were clashes as the Apprentice Boys marched along the wall, past the perimeter of the Bogside area. The RUC intervened and within hours the trouble had escalated into a full-scale breakdown of law and order.

The two days of rioting which followed became known as the Battle of the Bogside. It ended with the direct intervention from Britain in the affairs of Northern Ireland.

Four hundred soldiers of the 1st Battalion, The Prince of Wales's Own Regiment of Yorkshire, were deployed on the streets of Londonderry at the request of the Northern Ireland Prime Minister Major Chichester-Clark to give some respite to police.

Roy recalls: “The tensions had been building right up to the day of the parade and during the march itself you could really feel the atmosphere changing.

“We actually got past the point where the initial trouble broke out but news soon travelled about what had happened and people started to flock back over towards the city side.

“The crowds were massive on that day and you just knew that something really serious had happened. Of course non-one knew that they would call it the day that the ‘troubles’ began and no-one had any idea of how long they would last and how much they would cost in lives alone.

“My other main memory of that day is coming home on the train. At Cullybackey and at Ballymena there were big crowds of friends and family waiting on the platforms to cheer us home. Looking back it was like a victory celebration but nobody could have told people then what was coming.”