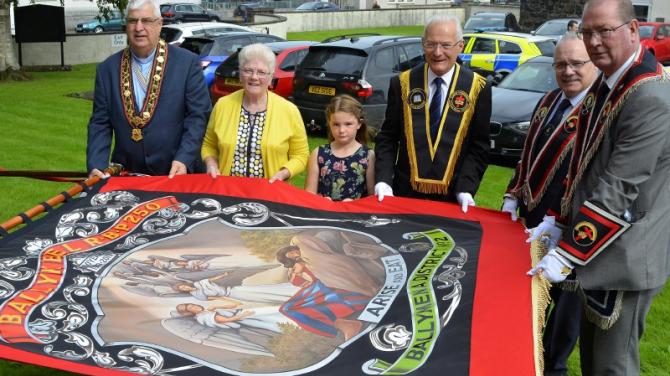 Ballykeel Royal Black Preceptory have marked their centenary with the unfurling of a new banner just in advance of the annual ‘Black Day’ demostrations.

The preceptory was originally formed as Ballykeel War Memorial Temperance on May 27 1919, a reflection of the widespread sense of loss which permeated society in the aftermath of the costly 1914-1918 conflict.

Records show that the first Worshipful Master was John Featherstone from Moat Road, in Harryville.

The current WM is Sir Knght Desmond Armstrong, a Harryville native himself.

From the beginning, the Preceptory has had strong but undefined links with Cullybackey.

It was an ‘unwritten rule’ that the WM was a town resident one year and a Cullybackey man in the following year.

This is the Preceptory’s fourth banner and replicates the first with imagery illustrating the Biblical ‘Arise and eat for the journey is far’ on one side and Britannia on the other.

The original name of the preceptory was also incorporated

Guest speaker at the unfurling, which was held at St. Patrick’s Church of Ireland, Ballymena, was Sovereign Grand Master Rev William Anderson JP.

A welcome statement from Wor. Sir Knt. Desmond Armstrong was followed by introductory remarks by Wor. Sir Knt. Lexie Scott, a Past Master.

The opening prayer was led by Rev. Mark McConnell of St. Patrick’s Church and the reading was performed by Sir Knt. Colin Crawford, Chaplain of Ballykeel RBP.

The presentation of scissors and banner unfurling was conducted by Miss Macie Armstrong and Mrs. Elizabeth Hanna .

The last banner was in unfurled in 1996 when the speaker was the late Lord Molyneaux and the WM was Sir Knt.Ian Hunter.

The Preceptory were honoured with a Mayoral reception on the evening prior to the unfurling by Cllr. Maureen Morow.

Commemorative ties and badges have been produced and a centenary dinner will be held in Ballymena Masonic Hall on Friday, September 20.