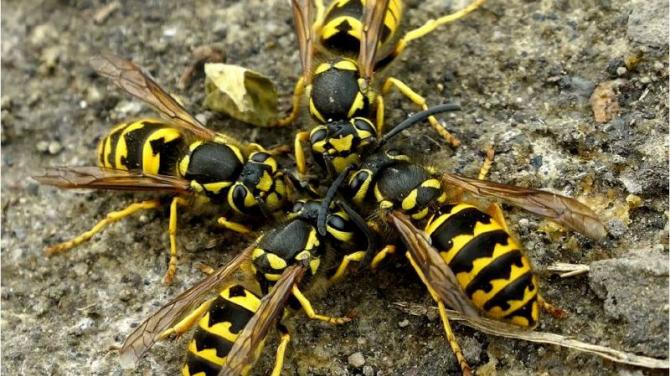 WASPS seem to be everywhere this year and in the closing weeks of summer they are causing major problems for scores of local households.

And it's easy to say 'just let them alone and they won't harm you' UNLESS you've got a buzzing Heathrow airport scale problem around the lid of your brown garden and food waste bin!

That's the issue which has lots of locals frantically trying to work out just how they are going to wheel their bin out onto the street for collection without becoming a sting magnet for a swarm of angry wasps.

One man who was faced with the problem last week admitted he was 'more than likely' to blame for his plight.

"I'll hold my hands up," he told the Guardian sheepishly. "I just fired a few apple cores in to the brown bin without covering them up. And a green bag may split when I slung it in too.

"I was pretty much setting up a sugar-rush picnic for every wasp in the area! At one stage it was pretty scary just going past the bin. You would have thought there was a nest in it."

So what steps did he take to get the wasp infested bin out for collection?

"Not ashamed to say I waited until nightfall when the activity has pretty much died off. Then I kitted up from head to toe - beanie hat, gloves, the lot - and trundled it out as fast as I could. Thankfully, the bin men were able to empty the contents and that seemed to sort out the wasps. I gave the bin a thorough scrubbing so hopefully they won't be back. I've learned my lesson."

And he had this additional piece of advice for householders: "Don't take it for granted that your bin is fully secured when the lid is down flat. Have a closer look and you will see that the bins all have just enough of a tiny slot for a wasp to creep through. It's really amazing to watch in a horrifying way!

"There's much less of a problem with the black bin because they are mostly lined with a good plastic bin bag which fills up the gaps and stops them sneaking in. But who lines a brown bin?"

We sought the advice of the bin experts at Mid & East Antrim Borough Council and they came up with the golden rules to avoid becoming a victim of a wasp takeover.

· Place your bins from windows and doors

· Don't dump food straight into your brown wheelie bin, it is best to use a tied compostable bag

· Don't let food sit for too long in your kitchen bin

· Clean all of your bins

· Don't leave your bins out too early

· Clean up food and spilled drink immediately, especially if they are sweet or sticky

· If you have fruit trees or bushes in the garden, in the autumn pick up fallen fruit before it rots