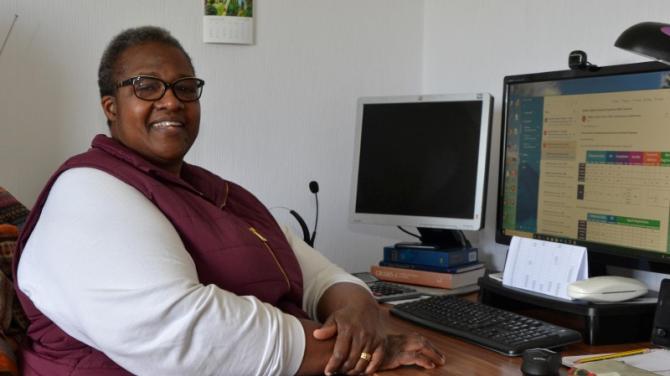 A programme to tackle the increasing prevalence of type 2 diabetes by PHA is operational across the Ballymena area.

Approximately 96,000 people are living with diabetes in Northern Ireland, a startling 69.3% increase since 2007[1].Type 2 diabetes accounts for 90% of all cases of diabetes and is a serious and progressive condition.

The disease can lead to early loss of life, cause preventable sight loss in working age people, and is a major contributor to kidney failure, heart attack, stroke and even amputation, yet the illness is often preventable by adopting healthier lifestyle changes.

The new Diabetes Prevention Programme is aimed at people who have been identified as pre-diabetic – those who have been tested and have a blood sugar level slightly above the normal range – by their nurse, pharmacist or doctor.

Thelma Shanks from Cullybackey was referred onto the programme this year.

She said: “There is a history of hypertension and diabetes in my family.

“Several of my paternal aunts sadly passed away due to complications that came with the disease, and my mum was found to be diabetic following admission to hospital for routine tests.

“I was born in London, but grew up in my parent country, Jamaica. I returned to the UK for good in 1996, and my husband and I moved to Northern Ireland, where all my children were born, in 1998.

“As a nation, we from the Caribbean tend to be a bit more susceptible to diabetes than others, so it wasn’t a complete surprise to be told I was at risk of developing the disease.

“I am also a trained doctor so despite having given up my profession when I had children, I have knowledge of the medical risk.

“I have a wonderful busy family life. I have four children, all of which I home schooled, and of course, their needs always came before mine.

“When you’re running a busy house and looking after everyone else it’s easy to forget to look after yourself. However, in 2017 when I heard that a health fair was coming to the area I decided to go along. For a small fee they carried out multiple tests which showed I had hypertension or high blood pressure.

“I decided to make an appointment with my GP who put me on a number of drugs, first Irbesartan, then Amlodipine and finally a diuretic to bring my blood pressure under control.

“I realised I needed to be more careful with my diet and tried to be a bit healthier but I admit it was a bit half-hearted.

“My blood sugar levels were border-line; they weren’t going down but they weren’t going up either, so I thought everything was all right. I was having routine check-ups with my nurse at this stage so I was on her radar and having blood tests taken intermittently. In April 2019 I had my regular tests done and then hopped on a plane to London.

“It was my daughter’s birthday and I had decided to treat her by going away for the week. We had just made it to the hotel when I received a phone call from my nurse.

“She said tests showed my sugar levels were up and I was actually diabetic, which was the wake-up call I needed. Let’s just say it wasn’t quite the luxury week that I had planned! My daughter certainly ate well, but no sugar passed my lips that trip.

“Needless to say, I had the blood tests repeated soon after our return, and was delighted to learn that due to my dietary sacrifices, my blood sugar levels had again receded into the ‘pre-diabetic’ band.

“Prior to our trip away, my doctor had called me. She said there was a new Diabetes Prevention Programme starting soon in my area being run by the Public Health Agency. She asked if I would be interested and of course I agreed.

“The class has 10 others in it and we meet on Wednesday afternoons. There are eight women and two men, and together we re-learn what we should be eating, what to avoid, and how to step up our exercise routines.

“I’ve found it really helpful because everyone is in the same boat and we can share our experiences and encourage one another.

“Each week we build on the goals of the previous weeks, paying attention to diet and exercise and gaining strength from each other.

“I used to believe that running after a busy family was exercise enough but now I’m walking every other day, trying to increase my pace and my distance. My daughter and I often walk together and I try to keep up with her.

“One day I managed 11,000 steps in one walk and 3 of those miles were uphill. I’m trying to make long term changes and make sure these become habits I’ll stick to for the rest of my life. So far I’ve lost 4 kg, and my exercise levels have increased significantly too. My blood sugar levels have decreased, but more importantly I feel better physically and psychologically.

“The Diabetes Prevention Programme and the team who deliver it have been amazing. I’m looking forward to seeing a new me at the end of the nine and a half month course.”

The practice serves around 5,000 patients that live within a six mile radius of the surgery. Dr Jean McCaughern joined the surgery around 20 years ago and was placed in charge of the practice’s diabetes clinic.

At first she managed this alone, today she heads up this specialist clinic with the help of two practice nurses. She does this alongside her normal GP responsibilities.

She said: “When I first started the clinic around 2% of our patients were diabetic and that included those who had both type 1 and type 2 diabetes. Today that figure has more than doubled. In 2019 we have a prevalence rate of 4.5%. That’s how quickly the disease is on the rise.

“Often patients don’t realise just how serious the illness is. I have overheard patients saying ‘I just have a touch of diabetes’ or ‘I only have diabetes’, but it’s a serious illness which can cause deterioration of vision, contribute to heart disease, kidney disease, stroke, and vascular problems which at their worst can lead to amputation.

“Patients of mine have had all these problems and more. The reality is different to the perception and it’s only when difficulties start that people begin to understand what living with diabetes can mean. The longer you have the disease, the more likely you are to have any one of those complications.

“Having diabetes presents practical problems too. In some cases the DVLA can revoke people’s drivers licenses if they if they believe there is poor management of diabetes. This can include raised sugars, but more importantly sugar levels dropping and causing confusion in patients as is would be unsafe to drive.

“For some people having diabetes is out of their control. Those with Type 1 diabetes have no choice but to manage it using medication.

“For others who spot heightened blood sugar levels early, termed pre-diabetic, they have a window of opportunity to reverse or delay a diagnosis of Type 2 diabetes through healthy eating and exercise. That’s who the Diabetes Prevention Programme is aimed at and who it can help.

“Once higher sugar levels are discovered, the earlier people can make changes and the higher the chance they have of reversing the outcome. Sometimes, it’s not about changing the diagnosis but delaying it by a decade or so.

“It’s not all bad news though, having diabetes, whether Type 1 or Type 2, is largely manageable either by medication, treatment or diet.

“Insulin, used primarily for treating type 1 diabetes, lowers blood sugar levels when diet and exercise alone aren’t sufficient, but the effectiveness of these medications depends on how early the disease is diagnosed and the size of the dose.

“I was happy to get involved in the Programme. Having an interest in diabetes I was approached by the Public Health Agency at the operational stage to look at the programme’s viability in my area. I’m a big supporter.

“So far I’ve referred around 30 people from the practice onto the programme which educates and empowers people of the contents of foods, the need to exercise and develop better eating patterns.

“Often I’ve heard people say once they have to go on a special diabetes diet but that’s not the case, it’s just healthy eating, it’s the way we should all be eating.

“As far as the success of the programme goes, it’s a little early to tell. The first cohort of people started on the programme in May and early results are positive. Certainly weight loss as a group has occurred and people have more knowledge of food, portion control and exercise.

“So, there are benefits for all and for some the course is working really well. When you join the programme as a group you bond as a group, you encourage each other, you don’t want to let your group members down.

“That shared experience and cohesiveness is a real motivator and works across all ages and all groups. For many the programme offers them a chance to turn a future diagnosis around and gives them the tools to change their future.

“That can be life changing and what the programme is designed to do”.

The Diabetes Prevention Programme is run by the Public Health Agency.

It is aimed at people who have been identified as pre-diabetic – those who have been tested and have a blood sugar level slightly above the normal range – by their nurse, pharmacist or doctor.

The Diabetes Prevention Programme is delivered over a nine month period and is free of charge.

It is facilitated by health coaches who offer help and assistance to participants, helping them change their lifestyle, diet and physical activity with the aim of postponing and even preventing type 2 diabetes.