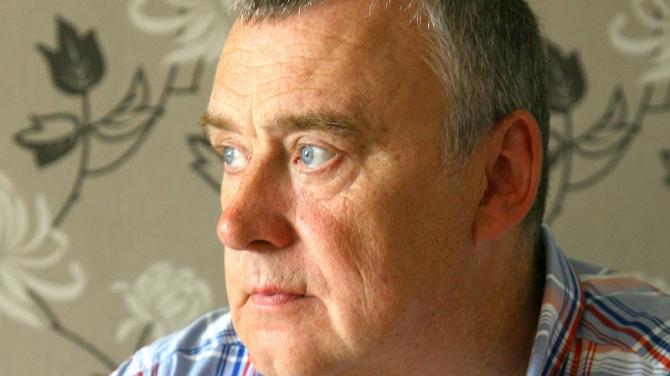 WHEN Ballymena man Sean Barr saw the gates of Michlein close after a 40 year career he reckoned it was one of the low points of his life.

But he could not have known that life was set to deal him an even bigger body blow in the form of a stroke.

Now Sean, 54, has spoken out on how stroke can also have a huge financial impact on the lives of survivors and their families.

“Following the stroke in May 2019, I couldn’t cope with work now so we have to tighten our belts financially. It’s not how I planned our retirement and the fear and worry of me having another stroke affects all the family. But I’m grateful that my recovery is going well”.

New figures from the Stroke Association reveal that almost half (43%) of stroke survivors across the UK, aged under 65, are faced with financial hardship after their stroke.

The charity’s findings reveal that more than 125,000 stroke survivors have experienced a loss of income, faced discrimination at work, and in some cases, have been forced to sell their home to pay for medical expenses.

Just eight months after being made redundant from a 40 year career as a security manager at Michelin, Sean suffered his stroke.

He recalls: “The morning it happened, I remember falling out of bed and my wife being concerned but went on to work. She knew something was wrong though and kept calling my mobile but I just couldn’t work out how to answer it. Thankfully Sharon came back and found me unable to speak properly and rang for an ambulance.

“They took me to the Royal Victoria Hospital where I underwent surgery to remove a clot from my brain”.

Sean says: “I was looking forward to retirement and then all of a sudden the stroke happened.

“It’s been a big shock. I’ve worked all my life and after the redundancy I planned to get a part time job to tide me over until I could retire. My wife Sharon and I had always planned to retire together when we were 57 but the stroke has changed all that. She’s still out at work but I’m at home.

“ My wife had to take a month off work after my stroke to help me recover. She worries about me doing too much and the kids are always calling to check I’m not doing things I shouldn’t be.

“They’re very protective and they won’t even let me cut the grass”.

“I worked for 40 years and it was a demanding job but I always coped fine. But since the stroke, I’ve struggled with anxiety and I’m just so tired all the time.

“I live with fatigue following the stroke, I couldn’t cope with work now so we have to tighten our belts financially.

“The doctors told my wife that I had a 50-50 chance when I got to hospital so it’s a miracle I’m here. Your health is your wealth but stroke definitely has an impact on your life, career and finances. I was looking forward to my retirement but having a stroke was a big shock”.

There are currently over 1.2 million stroke survivors in the UK, with a quarter of strokes happening to people of working age.

· Over half (51%) of stroke survivors aged under 65 gave up work or reduced their working hours following their stroke.

· Close to one in six (15%) of stroke survivors aged under 65 experienced discrimination, or missed out on a promotion, or said their employer was not supportive.

Barry Macaulay, Director of the Stroke Association in Northern Ireland, said: “Life changes instantly after a stroke, and the condition can have a huge cost, not only to people’s finances, but also to their health, independence and relationships. But not enough people realise the wider impacts that stroke can bring. Overnight, a partner becomes a carer. A breadwinner becomes jobless.

“These latest figures show that many stroke survivors are facing a life on the edge of poverty; many have had to give up work, and in some cases, face discrimination from their employers. This comes at a time when financial worries should be the last thing on their minds.”

The Lived Experience of Stroke report seeks to expose the realities of living with stroke. The charity wants everyone affected by stroke to have access to the support that they need, when they need it. The latest findings also show that:

· Nearly one in five (15%) of stroke survivors faced increased costs as a result of their stroke, which could include medication, aids and higher household bills due to being at home

· Sometimes stroke survivors even have to sell their homes to pay for medical expenses; across the whole UK stroke population this could be as many as 12,000(ii) people.

· Only one in 10 (10%) of stroke survivors had used a benefits or financial advice service.

Barry continues: “Recovery is tough, but with the right support and plenty of courage and determination, the brain can adapt.

“Time and again we’ve seen thousands of people like Sean, adapt to a new life after stroke; and we’ve helped them to adjust to a new normal. However, it is extremely worrying that not enough stroke survivors are receiving the support they need to either remain in work or access vital benefits.

“ I’d like to see more people contacting our Helpline to help them through this difficult process.

The Stroke Helpline (0303 3033 100) offers information and support to people who have been affected by stroke.