How B for Ballymena took a Tiger by the tail! 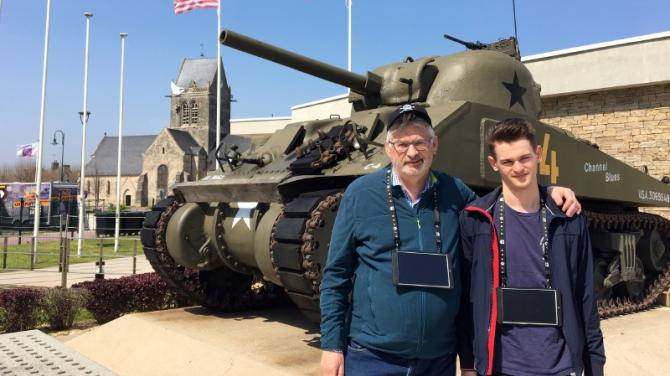 Ballymena man Matthew Walker came across a very special connection to his hometown during a recent visit to the D-Day sites in France.

Matthew was keen to make the journey before the 75th anniversary of the D-Day landings, and once there he visited most of the beaches, Pegasus Bridge, Pont du Hoc, St Mere Eglise and others.

However, much to his surprise he found out that a special sherman tank which had been involved in a now famous tank engagement was named “Ballymena”.

"Ballymena" was a Sherman Firefly and its upgraded gun put it on nearly equal terms, at least from a weapon perspective with the more powerful German tanks.

The tank was restored and has been included in a number of commemoration events.

Matthew compiled all the information he collected during his visit and penned the following:

Whilst the public focus will be on remembering the events of D Day itself, the subsequent Battle for Normandy took nearly 100 days of some the most brutal fighting of the war.

Even the Germans complained it was worse than the Eastern Front.

The key to military success in Normandy was always considered to be the capture of the city of Caen. As a result of its strategic importance both sides concentrated some of their best armoured regiments and equipment in this area.

The Irish Guards were recruited from Northern Ireland and the 2nd Battalion contained men from the Province. You can see it in the tank commanders names. We have Agnew, Brennan, Carson, Connolly, Healy, Harbinson, Mahoney, McCorkell, McGuire, McHugh and Robinson amongst others.

The 2nd Battalion Irish Guards was equipped with American Sherman tanks. These were 30 ton Medium tanks and mainly equipped with a 75 mm gun, a useful weapon against infantry but not entirely satisfactory against tanks.

The battalion was organised into sub units. There were three squadrons in the battalion, each composed of four troops and each troop had four tanks.

The Irish Guards named their tanks after towns and the 2nd Squadron named theirs with B’s. So we have Ballina, Bangor, Bantry, Belfast, Benbane and Ballynahinch. We also have Ballyraggett and Ballymena

Ballymena was a special Sherman tank. Ballymena did not have the standard 75 mm gun. The inconvenient truth for the Allied tank crews was that their tanks were not as good as the best of German ones. A German Tiger tank, for example could destroy a Sherman tank at a distance of over a mile. A Sherman on the other hand would be lucky to harm a Tiger at 50 yards.

The Britsh crews themselves had already concluded that a Sherman tank was not considered as safe a location as many would have been believed. Hence they covered the front with extra metal tracks and the propensity of the Sherman to do a “Ronson”, that is light up, encouraged the crew to get out very quickly.

To deal with the stronger German tanks the Allies devised a way of mounting a bigger gun on some of the Shermans. This new gun was so big it meant redesigning the tank and reducing the size of the crew. These Shermans, now armed with a 17 pounder gun, which referred to the weight of the shell it fired, were nicknamed Firefly

The Irish Guards arrived in Normandy 20 days after the initial D Day landings. Caen had still not been completely captured so the Irish Guards eere given a mission to help bypass the city of Caen by gaining ground to the east of the city and drive towards the village of Cagny. This was Operation Goodwood, named after the racecourse in England.

Undercover of darkness on the night of 17th July, Ballymena and the other tanks moved over the River Orne on newly constructed bridges and prepared for battle.

The smoke, noise and movement of the battlefield created chaos. Units became mixed up and both sides sometimes got lost. This led to one of the most famous incidents of the battle.

By the middle of the afternoon of July 18th the Irish Guard’s assault is under fire, stalled and mud bound outside the village of Cagny. Lt John Gorman of B Squadron 4th troop commanding a 75mm armed Sherman called “Ballyraggett” gets slightly ahead of his comrades and spots a German King Tiger at about 300yrs. Knowing his gun could do little damage to the King Tiger, Lt Gorman chose a dramatic course of action. He had previously briefed his crew Gunner Albert Scholes, Driver James Baron (possibly Brown) Radio operator Agnew, and told them if he got the chance they would adopt “Navy tactics”.

He instructed Baron to drive at full speed ahead and prepare to ram the German tank. Firing a high explosive shell at close range stunned the inexperienced German crew but had little impact on the tank.

However, the high speed collision effectively immobilized both tanks. The Sherman and the King Tiger were abandoned and their crews hid in the fields.

Lt Gorman realising the King Tiger was still a viable threat ran towards the nearest Sherman Firefly, in the knowledge only a 17 pounder gun on the Firefly could do any meaningful damage.

This was Ballymena. Some of Ballymena’s crew were already either dead or injured but Gorman jumped in and directed fire on the abandoned King Tiger.

The fighting continued for a while but eventually Gorman was able to rescue his own and other crews and get back to safety.

For his exploits Gorman - later Sir John - was awarded the Military Cross.

Editor’s note: Sir John, who died aged 91 in May 2014, was a Northern Irish Roman Catholic Unionist with an unflinching sense of service.

After the war he joined the Royal Ulster Constabulary before becoming a senior manager with British Overseas Airways Corporation, then head of the Northern Ireland Housing Executive. Finally he was elected to the Northern Ireland Assembly as the sole Roman Catholic member of the Ulster Unionist Party, and served as Deputy Speaker until the Assembly's suspension in 2002.

He was a frequent visitor to Ballymena during his time with the NIHE and he never failed tomention that he had married a Ballymena woman, Norah Caruth. Lady Gorman, passed away peacefully in Ringdufferin Nursing Home in 2017.