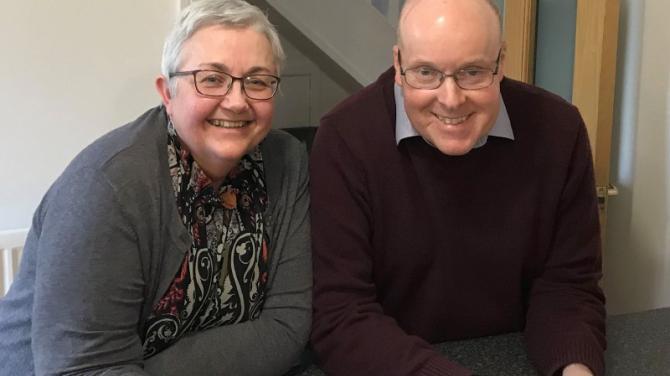 A Ballymena man has shared the story of how he rebuilt his life after suffering a stroke.

John Stewart, 50, had a stroke in August 2018. It is believed that John’s stroke happened when a blood clot travelled to his brain either during or shortly after heart surgery to repair an aortic aneurism (a bulging of the body’s main blood vessel).

When John first woke up after the lifesaving operation on his heart, the stroke had left John with very little movement on both sides of his body. In the weeks that followed his right side showed signs of movement first, closely followed by his left.

New research highlights a lack of knowledge about stroke and the devastating impact that it can have. It showed that nearly half of UK adults know someone who has had a stroke (20 million people), but most admit to a lack of awareness and understanding needed to support stroke survivors in their recovery.

A survey of stroke survivors) also revealed that many feel there is a lack of understanding with more than four of five (85%) of people affected by stroke saving the people they had daily contact with did not understand the impact of the stroke.

The research reveals that one important reason for the lack of stroke support for survivors stems from a lack of awareness of what stroke is and how it affects people. Shockingly, more than a quarter (27%) of the public (2) don’t know where in the body a stroke occurs: the brain.

For those that know a stroke survivor, a huge 82 % (1) feel that a greater understanding of stroke would help them support the survivor better. All this, despite stroke being the country’s leading cause of disability.

John’s experience supports the research findings as he says his friends and family knew little about stroke before it happened to him and sometimes struggled to know how to support him.

John, Executive Director of Corrymeela, a peace and reconciliation community in Ballycastle, said: “We had very little family experience of stroke. I suppose we were going on the basis of what we’d heard from others or seen on TV.”

“I can’t thank my GP and the health service staff enough for their care and dedication, and also the other organisations, like the Stroke Association, who were so quick to offer help and support. I never felt that I was alone. I didn’t know if I’d ever walk again. The first time I walked after my stroke, I walked in to the ward to a round of applause. It felt fantastic!”

“I suppose I wasn’t a particularly good patient. One side effect from spending so long in hospital was I had become so weak and didn’t want to be left on my own. I was afraid that if I was on my own I wouldn’t be able to get up if I fell. It was harder than I expected on the family looking after me. I didn’t realise how much I’d depend on Karen and our son and daughter, Katie and Jack. In the beginning. I couldn’t do anything. I needed their help for everything. From cleaning my teeth to shaving and dressing or handling a knife and fork”.

“Honestly, there were days I felt like giving up. Those low points where I felt down and depressed. But with the help of everybody around me I never did. I think with the stroke in particular it would be very easy to give up but there’s always something that you can do. You can always get a bit better and if you give it time, you‘ll get there. The attitude you take to it is so, so important and the support you get from the people around you.”

“I know I’ve done really well. The triumph I felt the first time I was able to tie a bin bag and take it out to the wheelie bin. Just to be able to help out around the house again like I used to”.

He said: “It’s like returning to work is the last piece of the jigsaw puzzle. Work was so important to me”.

Now eight months on, John still has no feeling in his right hand and has to manage fatigue as a result of his stroke. He continues to have problems with his vision and difficulty reading – a common effect of stroke. Thankfully John can now read print with corrective glasses and is slowly beginning to rebuild his life.

The charity published its findings to mark the launch of its newest campaign, Rebuilding Lives, which aims to showcase the challenges faced by stroke survivors and those who support them with their recoveries. drop in social activity on the part of the stroke survivor.

Ursula Ferguson, Head of Stroke support Services at the Stroke Association in Northern Ireland, said: “A stroke happens in the brain, the control centre for who we are and what we can do. Stroke is devastating and it changes lives in instant, but with the right support people can recover. Stroke can happen to anyone, at any time and often without warning so it’s a real challenge for everyone as they come to grips with such a life changing event. These findings highlight the complexity of stroke and raise the desperate need amongst people to understand the impact of stroke in order to better support their loved ones.

“There are over 1.2 million stroke survivors living in the UK with more than 36,000 here in Northern Ireland – many of whom are reliant on their friends and family, from help with daily living to understanding their emotional and mental health needs. It doesn’t have to be this way. We’re urging those people who know someone who has had a stroke to help turn this around and fill this knowledge gap.”

For more information about Rebuilding Lives or about stroke, visit www.stroke.org.uk/rebuildinglives.

For more information about what you can expect after a stroke, the Stroke Association has partnered with the Royal College of Physicians to produce a booklet accessible here: https://tinyurl.com/yyqj638z