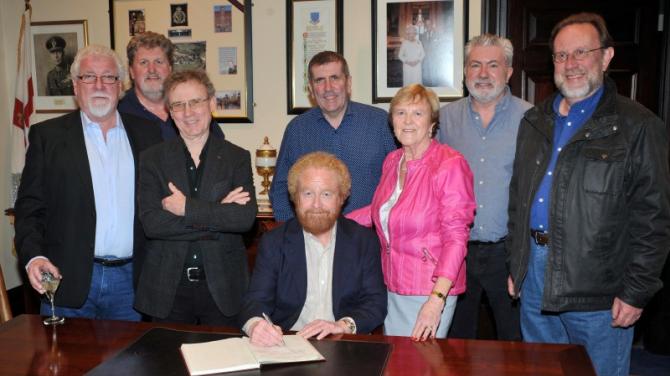 A TOTAL OF £3, 250 was raised for Air Ambulance NI following The Irish Rovers' sold out concert at The Braid on March 21.

The concert proved a resounding success and even saw visitors fly in from Florida especially for the performance.

It was said that the show could have been sold out ‘three times over’!

In 1968, The Irish Rovers had a breakout hit with their second album, The Unicorn.

That was the big break which made the Rovers a household name. Their success didn’t end there as they returned to the charts 15 more times in the years that followed.

As young immigrants, the Rovers emigrated to Canada and became so much a part of the Canadian culture that Canada’s Prime Minister Trudeau personally asked them to become full citizens so they could officially represent Canada around the world.

Since the 60s, the Celtic super-group have travelled the world as musical ambassadors - with performances from as far apart as the Arctic Circle, Japan, and Germany, with regular tours to Australia, New Zealand, and the US. The Rovers first became known in the US in the 60s on shows like The Tonight Show, The Smothers Brothers, Mike Douglas Show, The Dating Game (George Millar actually won the date), and even starring in The Virginian.

All proceeds were donated to NI Air Ambulance, the Mayor’s chosen charity.