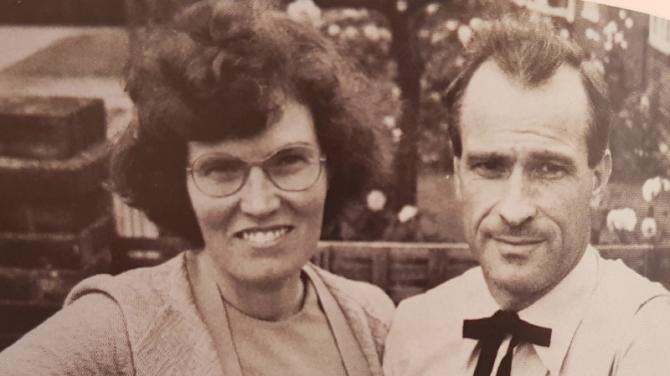 FORTY years have passed since the Vumba Massacre in former Rhodesia which resulted in the death of 13 Elim missionaries including Cullybackey man Roy Lynn, his wife and their three week old baby.

Roy (36) and Joyce Lynn (36) and their daughter Pamela were killed by Rhodesian black nationalist guerrillas at the Eagle School in Vumba on June 23, 1978.

Twelve people died in the brutal attack, including four children, whilst one missionary was found alive but sadly passed away in hospital six days later.

In tribute to the “martyrs of Rhodesia” performing arts expert Richard Hasnip has written a moving play which is being showcased across Elim churches this year.

The play is part of a collaboration with Elim Sound and Elim International Missions entitled A Call to Mission which includes worship, preaching and drama.

A Call to Mission took place at Cullybackey Elim Church on October 20 which remembered the 13 missionaries who lost their lives including Roy Lynn and his family.

The event is part of a special tribute to mark the 40th anniversary of the massacre which shocked the world.

General Superintendent Elim Pentecostal Churches, Chris Cartwright said: “Ordinary people, some single, others married with small children, from Elim churches all over the UK and Ireland obeyed the call of God to serve people of that strife-torn land. They were motivated not by politics or the rights and wrongs of the cause, but by the cause of Christ.

“They served primarily as medics, nurses, teachers and educators. They started small fellowships, taught the scriptures and helped and encouraged local indigenous churches.”

Roy, along with his siblings and parents, attended Trinity Presbyterian Church in Ahoghill. With some of his young friends he enjoyed the fellowship at Cullybackey Elim Pentecostal Church and it was from there he left to study at Elim Bible College in Capel, Surrey.

Following college Roy was inducted as the pastor of Brookeborough Elim Church and in 1975 he responded to the request of Elim International Missions to travel to Rhodesia to help at Katerere Mission Station.

It was at Katerere that Roy met the young woman that was later to become his wife, Joyce Pickering from York. Roy married Joyce, a highly skilled nurse and midwife, in the UK on July 23, 1977.

During this time Rhodesia was in conflict and the situation was becoming increasingly more dangerous. Despite this every one of the Elim missionaries bravely and unstintingly opted to stay in Rhodesia to continue with their work. It was agreed, however, that they would move from Katerere to Vumba on July 21, 1977 as a safety precaution.

Whilst there, Joyce Lynn opened four clinics in nearby areas while her husband Roy preached and ministered to the men. The couple's daughter, Pamela Grace, was born on June 1, 1978, just three weeks before her tragic death.

She was killed along with her parents and 10 others when a group of about 29 Rhodesian black nationalist guerillas turned up at the school. The murders took place after the guerrillas had given political talks to 200 pupils.

Roy's brother Geoffrey first heard about their deaths the day after the massacre when a man from their local church conveyed the news to him.

In tribute to all those who died in the Vumba Massacre a memorial garden has been opened at Elim's headquarters in Malvern.

Pastor Chris Cartwright said: “For many who visit the garden, they will know something of the events that happened on June 23, 1978. It is very much part of a deeply ‘personal’ Elim story and certainly a story that the immediate families of the missionaries will vividly remember.”