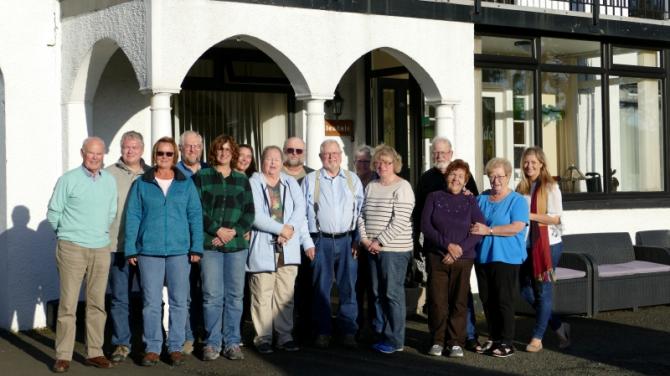 A quest by an American family to find their distant relatives has led them all the way to the village of Cushendall.

Allen Murphy along with his brothers Rodney, Donald and Daniel and sister Sheila Neckstad decided to cross the Atlantic and spend ten days in the area researching their family tree.

The idea for the trip came about during a family gathering to celebrate the Fourth of July at their home in Montana.

During a discussion about their ancestry they decided to search their grandmother's marriage certificate and discovered that her maiden name was McFetridge, her father was William McFetridge and mother was Sophia McClure.

On the same marriage certificate they found that their grandfather's father was Daniel Murphy and his mother was Mary McClarty. It appeared that everyone was from a small town in Northern Ireland, specifically Cushendall.

A year after the reunion a note was sent to the family sharing some of the information and asking if anyone was interested in going to Cushendall. They all agreed and the family found accommodation at Glendale Bed and Breakfast in Cushendall.

Allen said: “We fell into fantastic luck in reaching the O'Neill family at the Glendale Bed and Breakfast.

“While we did spend time enjoying the coast of Antrim, we also spent several days researching our family tree. We were quite lucky to have met up with Alan Murphy in Cushendall and he helped us with the church records to find the marriage, birth, baptism, and death records of the local church of Ireland.

“While in the church we devoured as much information as possible and found the facts about our great grandparents, and great aunts and uncles. This included finding two new Great Aunts (Anne and Mary) and a Great Uncle (Archibald.).

“During a separate trip to the local library we found written confirmation and the exact store fronts of our Grandmother’s father and brother along with pictures of the stores along with a picture of what appears to be our Great Grandfather sitting in his cherribanc that he would use to drive tourist in the 1930’s between Larne and Ballycastle.”

The family also found the will of their Great Grandfather and Great Grandmother, as well as confirmation that they are from the Murphy’s of Red Bay townland, and the McFetridges that owned the stores on 6 and 8 Mill Street.

“We would have never found this information sitting behind a computer screen at our home,” Allen said.

As well as researching their ancestry the family spent time enjoying what the area has to offer including a visit to the Giant’s Causeway, Carrick-a-Rede rope bridge, Dunluce Castle, Bushmills Distillery.

The Murphy family said the community of Cushendall was “as welcoming as you will ever find anywhere in the world”.

Allen added: “Each night our family would 'invade' one of the Cushendall restaurants for a meal, a pub for a refreshing beverage, or one of the local stores. At every stop we were always greeted with friendly people and great conversation.

“On our last night our newly adopted Auntie Mary (Eamon’s mother) took the two youngest brothers on a personal tour of Cushendall that included confirming the location of the Murphy family homestead, the location of our Great Uncle’s petrol station just outside of town, the Layde church ruins, a few back roads in the area, the house of the famous painter from Cushendall (Pedraig McCaul), and a few houses of her own family.

“Mary may not have known it, but we’ve adopted her and she has become one of our favourite Aunties of the Murphy’s from Montana,” he concluded.

The Murphy family were helped in their search by Alan Murphy of Cushendall Church of Ireland who gave assistance with church records and Donnell O’Loan of Antrim Glens Tourism.