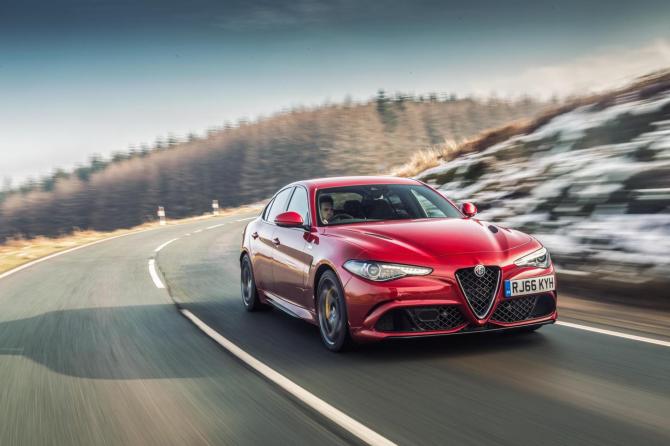 ONE of British television’s best-known motoring journalists once famously said on air that, “you cannot consider yourself a true petrolhead until you have owned an Alfa Romeo”. He suggested the agony of one leaving you stranded at the side of the road made you appreciate the good times all the more.

OK, so reliability may be a sore point for Alfa Romeo but there is no denying how they look can melt the most hardened of hearts – and people love the company for it. But is style alone enough to convince someone to buy a £31,000 Giulia rather than a 3 Series or a C-Class?

And would the answer be the same if Alfa Romeo came forward with a Giulia costing double the asking price? The car in question is the flagship ‘Quadrifoglio’ and, just like the regular model, this head banging version goes up against BMW (M3) and Mercedes Benz (C63 AMG).

On paper, the Giulia Quadrifoglio has no issue holding its own. The twin-turbo V6 petrol derived from Ferrari throws out 503bhp, will launch the four-door from zero to 62mph in under four seconds, and carry it to a supercar top speed of 191mph. By comparison, the M3 – which is due to be replaced in 2020 – is two tenths slower to 62mph, and will call it a day at an electronically enforced 155mph.

UK Quadrifoglios have an 8-speed automatic transmission that relays power to the back two Pirelli P Zero Corsa tyres. Similar to a computer console game, there are different levels to Milan’s finest. Four in all, these are unlocked via a small rotary dial on the lower console.

Marked ‘Race’, ‘D’, ‘N’ and ‘A’ in a clockwise formation, A (Advanced Efficiency) and N (Natural) keep a tight hold of the engine’s leash. What we have here is a coffee made from a single shot of the finest Italian espresso. In other words, most people can handle the kick.

In all likelihood, owners are going to spend most, if not all, of their time in D (Dynamic) – a coffee made from a double shot of the finest Italian expresso that really gets the heart pumping. Here, throttle response pick up is immediate and the growl from the four exhausts is more audible from inside and outside the cabin.

Chances are, you will get carried away in the moment once Dynamic is selected. Engineers at Alfa Romeo accounted for this by installing any number of safety aids that serve as an insurance policy. In the event that the rear tries to break free under hard acceleration, power is dulled to rein in wheel spin.

Even if you are not quite brave enough to let the Giulia Quadrifoglio loose completely, Dynamic is still immense fun. There are few cars on sale right now that combine family practicality (480-litre-boot and 40/20/40 split-folding rear seats), catwalk looks and jaw-dropping performance in one package. Period.

If you can muster the courage to knock the car into ‘Race’ mode, you have to exert a little extra force on the drive mode knob through your thumb and index finger. This is to ensure you make the choice intentionally rather than accidentally. Do this and the Quadrifoglio becomes a car that can cost you your licence and your liberty in the blink of an eye.

Linear and lag-free power delivery means that the deftest jab of the noisy pedal will send the car lurching forward and you crashing into your seat. When you pick out a suitable stretch of Tarmac to stretch the Quadrifoglio’s legs, the world around you resembles a blur. How to describe it? Imagine you are Han Solo travelling at light speed. That is how.

This is backed up by a spine tingling soundtrack, perfectly weighted steering and a sweet-changing transmission that can be controlled via two perfectly over-sized column-mounted metal paddles. Meanwhile, 50:50 weight distribution and a roof constructed from carbon fibre have gifted a balanced, controllable chassis that is sprung firmly enough to be sporting, but not rigid to the point of being intolerable on our battered roads.

Our car’s trademark 19-inch ‘teledial’ alloys (£695), ‘Competizione’ red paint (£2,500) and four leaf clover badging on the front wings mark it out from the crowd, as do lashings of real carbon fibre for the aero-splitter at the front and boot-mounted spoiler, pronounced side skirts and deeper bumpers front and rear. The car does not go around shouting, ‘Look at me’, but when it does grab your attention you know that it is something pretty special.

This sense of occasion continues on the inside. Most eye-catching of all are the driver and passenger carbon shell Sparco sports seats. At £3,250 they don’t come cheap, nor does the green/white-coloured stitching for the door rests and dash top (£195). The leather/alcantara flat-bottomed steering wheel will set you back £425 but the carbon fibre insert and the Ferrari-style red stop/start button makes you think it could be money well spent.

There are some reservations, mind. More than a few of the plastics are tacky and second-rate, while the feel and mechanism of the gear lever appears to have been modelled on a PlayStation joystick. Functionality is another weak point, particularly the reversing camera screen. Roughly the size of a beer mat, the graphics are fuzzy and not what you expect in a car starting north of £60,000.