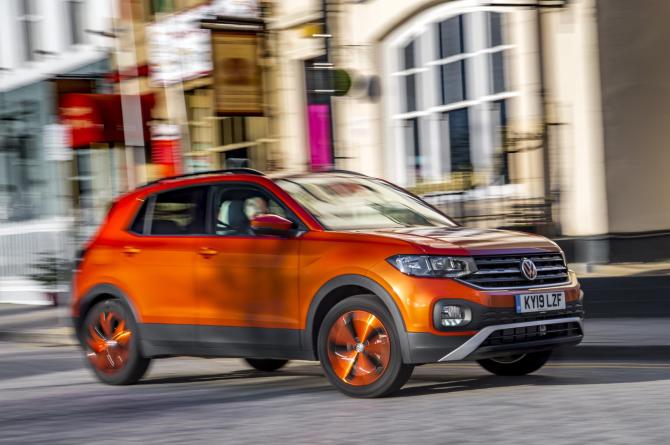 T-Cross injects a sense of fun into small crossover class.

THOSE employed in Volkswagen’s marketing department have not dotted many i’s lately but they have been busy crossing some pretty sizeable t’s. First up was the Touareg followed by the Tiguan, the larger seven-seat Tiguan Allspace and then the T-Roc. Now we are getting this: the all-new T-Cross.

Like some other rival volume car makers – Mazda for one, and Ford being another – Volkswagen has adhered to a sliding scale, launching the roomiest SUV in its range first and working its way down. Have they got it wrong? In the case of Volkswagen, nothing is ever left to chance. Demand for these models is really starting to take off right now and, it is claimed, sales will double in the next decade.

To maximise the profit on every unit that is sold, Volkswagen has based the T-Cross around the Polo supermini. It inherits the hatch’s platform and same three-cylinder petrol engines. They even come off the same Pamplona production line in Spain. The important differentiator is their size. Parked up side-by-side, the T-Cross is longer (+54mm) and taller (+138mm) but more or less the same width.

So, it may be bigger on the inside, hence the use of “spacious and practical” in the PR material, but it is still easy to manoeuvre which is why Volkswagen is keen to stress that this is an “urban friendly” runabout. Available in four core trims – ‘S’, ‘SE’, ‘SEL’ and sporty ‘R-Line’ – the company’s fifth SUV is also said to be “tough, flexible and tech-laden”.

To deliver our verdict, we spent the day in a 113bhp ‘SE’ with the 6-speed manual – a combination that is anticipated to be the biggest-seller in the range.

If you are thinking, “That car is familiar – I have seen it before somewhere”, you are not wrong. At the 2016 Geneva Motor Show, Volkswagen pulled the covers off the ‘T-Cross Breeze’ – a glimpse of what a compact SUV from it could be like. Three years later, the finished article bears only a vague resemblance to that cabriolet showstopper – but it is still a nicely proportioned piece of design work.

The T-Cross has the current Volkswagen look across the front. There are clear elements of the T-Roc at play, such as the bullet-shaped driving light surrounds, as well as the low, wide grille found on the Tiguan. As for the rear, an oh-so-2019 full-width faux light bar dominates the conversation. How to sum it up? ‘Fun’. For Volkswagen, that has to be good because you tend not to associate it with that characteristic.

This free-thinking approach extends to the long list of options, specifically the Style Packs for the inside and out. Our favourite is ‘Energetic Orange’. The alloys on these, interestingly, appear to have been inspired by Cupra – the performance arm of Volkswagen’s sister firm, Seat.

Choosing a Style Pack automatically injects colour and texture on the inside where the Polo influence is at play. Sadly, the materials are not up to Volkswagen’s impeccably high standards. A sea of hard, scratchy plastics is to be found on the dash, the centre console and around the doors. Then again, this is what you tend to encounter in rivals so, from that point of view, the T-Cross is not at such a disadvantage.

In typical Germanic fashion, there are no rough edges to be found and every panel has been screwed together tightly. Buttons and switches have a precise action and the software is very beginner friendly.

Touted as a higher end small SUV, this is reflected in the price. To mitigate this, Volkswagen promises a wealth of equipment. Despite having an 8-inch touchscreen, automatic headlights and 16-inch alloys, the bulk of customers are set to look past ‘S’. ‘SE’ models and above have smartphone integration, Adaptive Cruise Control and a Driver Alert system. ‘SEL’ introduces LED headlights, tinted windows, front sports seats, satellite navigation, climate control and front and rear parking sensors. A digital driver binnacle and 18-inch wheels are the standout features on ‘R-Line’ cars, meanwhile.

Rather than fall into the trap of charging customers to pay for fixtures and fittings that boost overall practicality, a sliding rear bench is compulsory. With this the choice is simple: moving it back frees up lots of leg room and moving it forward creates a Golf-sized load area (455-litres as opposed to 385-litres).

Curiously, the extra space you create by pushing the beach towards the driver and passenger leaves a gaping hole between the adjustable boot floor and the split-folding rear seats where items are prone to end up getting lost. Far from practical, much like the ‘Beats’ subwoofer (£430) that eats into load volume.

Leave the rear bench alone and all-round space for two adult passengers is going to be spot on. As for getting in or out, this is helped by a jacked up ride height (+120mm). The T-Cross scores extra marks for convenience, namely the two USB charge points in the front and the two in the back. You also get deep door pockets, a centre storage bin and a handy pull-out tray that is built into the base of the driver’s seat.

On the move there is no noise worth talking about inside the T-Cross. The smooth 1.0-litre petrol is a peach. A swell of torque comes on grid above 2,500rpm and there is no let up as you quickly approach 5,000rpm for a 0-62mph time of 10 or so seconds. At the higher end of the rev band the engine remains peppy and refined.

Detracting from the experience is a clunky gearbox that lacks a final degree of finesse and therefore requires a firm hand. There are no such issues if you go down the automatic route. Albeit more expensive, the 7-speed robotised DSG ‘box has a sweeter action. You can either jam it in ‘D’ and leave it to get on with things or, via the paddles behind the steering wheel, select gears yourself.

As long as the T-Cross is easy to drive and comfortable, which it is on both fronts, then few in this class are going to be overly bothered by minutiae such as grip, lean and steering response. For what it is worth, it behaves like a small car (nimble and wieldy) and has mannerisms akin to a much larger vehicle (absorbent ride, minimal roll, assured handling).

On the UK’s itty bitty roads, Wolfsburg’s newest baby is softly sprung to deal with the worst that is thrown its way without resulting in head bobbing. How the set-up is affected when a heavier diesel unit is placed over the front axle remains to be seen. When it does enter service before the end of the year, expect it to be a 1.6-litre TDI good for 95bhp.