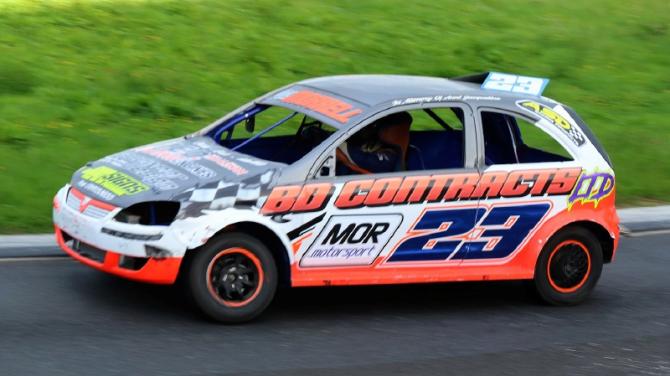 TWO short oval racing World Championship titles are up for grabs when the Summer Speedweekend takes place at Tullyroan Oval near Dungannon on Saturday/Sunday (July 23 and 24).

The headline event will be the Auto Collision Belfast sponsored Stock Rods World Championship which will be defended by Scottish lady racer Siobhan Martin.

Also the current National Champion, she took the title in style at the prestigious Ipswich Spedeweekend last season.

Nutts Corner based racer Mark Crawford will also start as a hot favourite, as he has already bagged the British and European titles this year.

The seventeen-year-old is brimming with confidence currently as he aims for a hat-trick of majors in just his second season in the senior ranks.

Another star contender will be another Scottish driver, Chris Lattka from Falkirk.

He is already a five-time World title holder in his distinguished career and will be giving it his all to make it six.

English Champion Daniel Rea from East Anglia and Kent based former National Champion John Smith spearhead the English entry, whilst Declan McGrath, John Shanahan and Colm O'Sullivan will be making the trip from the Republic of Ireland.

Cullybackey's Marc Morrell and Enniskillen's Stevie McNiece are two former World champions amongst the local ranks, whilst Glenavy duo Jonny Cardwell and Dan Shannon will be keen to grab the big one having starred on the local scene recently.

Kells driver Shane McMillan and Ballymena veteran Victor McAfee will be others in the thick of the action.

The second main event of the weekend will be contested by a capacity entry of Ninja Karts in the LJN Motorsport World Championship, the formula for the 6-11 year old drivers.

Their racing can be fantastic to watch as they blast around the oval three and sometimes four abreast!

Antrim's Leyton Hughes will defend the title he won at Ipswich a year ago, but he will face a stiff challenge from some very talented visiting drivers.

Hampshire's Murray Hall won the European Championship earlier this month after a commanding drive, whilst Scotland's Kenzie Bell is the current British Champion.

In total over 20 visitors will take to the Tullyroan track in search of glory.

Cullybackey's Keegan Turtle, Dungannon's Ben Hawe and Larne's Charlie Johnston will be others hoping for a good run.

The Lightning Rods British Championship is also up for grabs over the weekend, with Antrim's Ricky Shaw the defending champion.

Just two weeks ago Ricky also won the World title at Hednesford in Staffordshire, so he comes into the event high on confidence.

Portadown's Irish Champion Nigel Jackson, Magheralin's Stuart Agnew and Bleary's Mark Corry will be amongst the challengers from another big field which will include a big field of visitors but should see the locals as the ones to beat.

There is a full support programme across the two day, headed by Superstox and 1300 Stock cars on Saturday evening.

The elite National Hot Rods will contest the opening round of the Simpson Race Exhausts World Series on Sunday afternoon, with the Junior Productions also in action.

Racing commences at 4pm on Saturday and 1pm on Sunday - more details can be found at www.dmcracepromotions.com