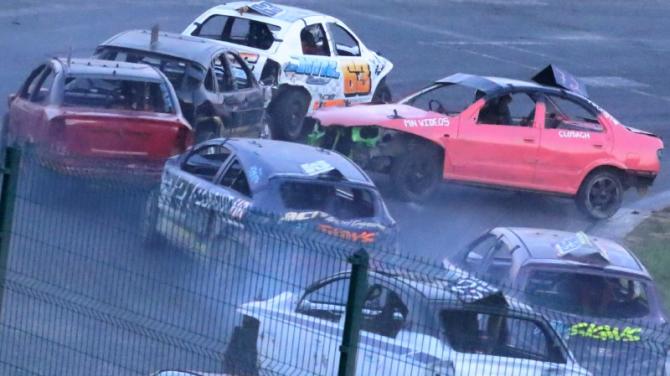 THE Ulster Championship for Rookie Bangers tops the programme at this Saturday's (July 9) race meeting at Aghadowey Oval.

Thrills and spills are guaranteed as a big grid of drivers chase the coveted title.

Limavady's Josh Goligher will defend the title he won last year, but will face stiff opposition from a quality field. Garvagh driver William McFaul and Donemana's Gavin Gamble will be two to watch, alongside Cullybackey driver Marc Morrell who will double up on the night by racing in the Stock Rods formula too.

For the Stock Rods it is their last domestic meeting before neighbouring Tullyroan Oval stages the World Championship on July 23/24.

Kells star Shane McMillan, Ballymena's Victor McAfee and recent form man Michael Rodgers from Randalstown will be others to watch.

The all action Superstox never fail to disappoint, and their last meeting at Aghadowey was a cracker!

Aughnacloy's David Beattie took the honours on that occasion but will have to fight for the win this time around.

A whole host of star names, including Irish Champion Jordan Robinson from Portadown,

The budget Thunder Rods formula will be contesting their King of Aghadowey title, and with grids of over 25 cars the norm in the formula this season, it will be a tough contest.

Others to watch out for will include Macosquin's Darryl McAleese, Ballycastle driver Andrew McLean and Rasharkin's Jason Darragh.

Completing the line up will be the rapid 2.0 Hot Rods, where Antrim's British Champion Conor Hughes will be hoping to repeat his final win at the last Aghadowey meeting.

The first green flag of the evening drops at 6.30pm.