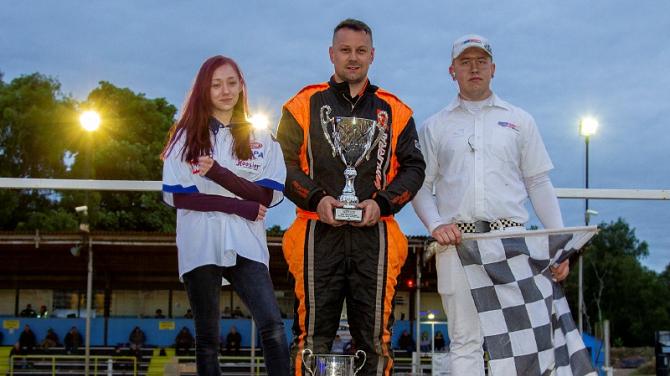 GALGORM’S Shane Murray was victorious in the coveted Angie Rowe Memorial Thunder 500 event for National Hot Rods in Ipswich at the weekend.

The annual event is seen by many as a warm up for the prestigious World Championship, which will be held at the same venue over the first weekend in July.

Murray travelled across to get valuable track time and testing in his Hankook/Murrays of Randalstown-backed Ginetta, and promptly showed the quality field the way home to the chequered flag!

Shane managed a second and seventh in his qualifying heats which was enough to gain pole position for the final, and from there he was able to stave off the challenge of former World Champion Chris Haird from Cambridgeshire to take the Thunder 500 title and the coveted Angie Rowe Memorial Trophy.

The boost in confidence will do Murray no harm whatsover, as his attention now turns to the biggest race in the oval racing calendar, the National Hot Rods Championship of the World, back at Ipswich in less than a fortnight's time.

* In this weeks Guardian Sport is a full report and pix from Saturday night’s race meeting at Aghadowey Oval.