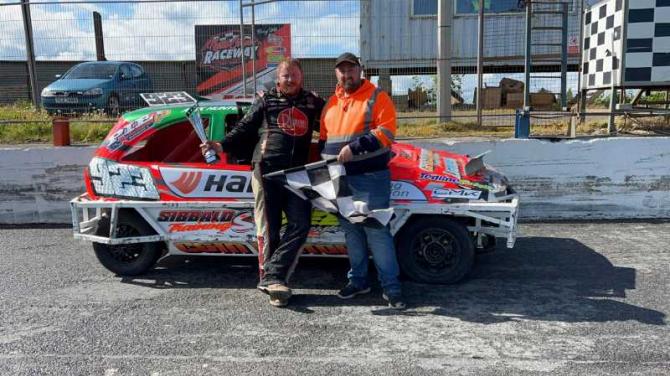 The main event will be the F2 Stock Car 2022 Challenge Trophy, also up for grabs will be the ORCi Stock Rod European title.

There will be support racing from the 2L Saloon Stock Cars, Gp2 Lightning Rods and Micro F2's.

Also on the race card will be the Junior Rods, Micro F2's and Back 2 Basic Micro Bangers. All the ingredients are in place to make it a weekend of top class race action, not to be missed!

Scott Rainey was the first winner of the afternoon in the hard hitting 2L Saloon Stock Cars before Antrim's Bradley Woods took the heat two Spoils. Come final time it was the former Irish Champion Anthony McIvor who secured the victory ahead of Lee Booth and Adam White.

The 1300 Stock Cars were out in force providing the onlookers with three exciting races. Local man Stephen McCready chalked up a double heat victory and looked as though he could go all the way in the final, only to be interrupted by the current Irish Champion Chris Hamill on the final lap. Hamill crossed the line first, McCready was runner up with Simon Lamont third.

Joshua McMullan dominated the early afternoon Stock Rod events, taking glory in both the heat races. The returning Raymond Harper showed he has lost none of his flair, when he visited victory lane after a final executed final win. Joining Harper on the podium was Shea Duff the runner up and William Donnell in third.

Jack Morrow was again on top form in the Junior Rod section where he was the heat one victor. Heat two went the way of Brodie Millar before Calyn People produced a master class in the meeting final. Peoples stormed well clear to take the honours ahead of Aaron Ward and Morrow.

Colin Crawley enjoyed a brace of wins in the popular non contact Gp2 Lightning Rod formula, taking the heat one and final spoils. Heat two was won by David Nesbitt. Crawley was followed across the line in the final by George Esler and Andrew Cole.

The Micro F2's again turned out in force with car counts well into the teen's, amongst the top performers on the day was William Graham and Harry Martin.

Completing the busy schedule was the Elite Hot Rods. Donegal's enjoyed a heat and final double only being denied the perfect hat trick by Alistair Murray who romped to victory in heat two.