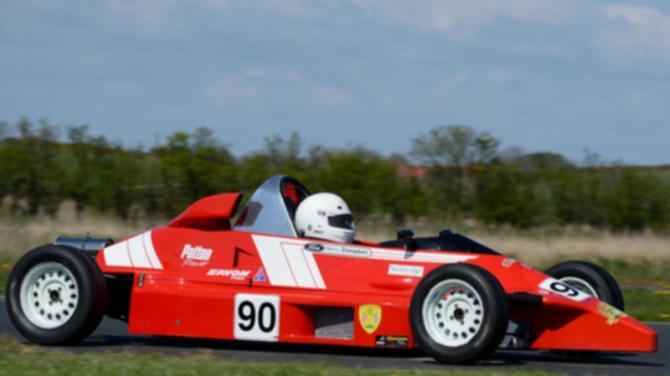 THE May car and superkart meeting at Kirkistown circuit in County Down promises to be another cracker this coming Saturday 28th.

The featured class this time is Saloons and GTs. The Saloon Championship is tight at the top and all the contenders have entered.

Peter Baxter, from Lurgan, will be the man to beat. He currently leads the championship by 10 points from Ballinahinch driver, Ralph Jess.

Nutt’s Corner driver, Donal O’Neill is in third place. Michael Clune, from Blessington, is debuting a Nissan Skyline and will be a dark horse.

Gareth Blaine, from Downpatrick, has been a revelation this season in Alan Stewart’s BMW 330i.

He has already put in some great performances and is hoping to narrow the gap in the 330i Championship, to Lisburn’s Greer Wray.

Keith Wray, from Dundonald, has identified the cause of some handling issues in his similar machine, so expect an improvement on recent from.

The GT class sees a number of Irish Supercars making an appearance.

These space-frame machines are quick. Paul McAlinden, from Warrenpoint, has been getting a few outings this year but his car has yet to prove reliable.

Charlie Linnane, from Kilmacanogue, should be at the sharp end, although Paul Parr, from Hilltown, will be keeping him honest.

The Modi-5-Cup for Mazda MX5s normally runs with these classes and may well do on Saturday.

Francie Allen, from Moira, Gavin Kilkey, from Derry, David Cousins, from Ballywalter, Jim Kennedy, from Crossmaglen and Damian Moran, from Newry are all joined this time by Gregory Radcliffe, from Banbridge.

All of these cars will be close and choosing a winner in advance would be a fool’s task.

There are 11 Kirkistown Fiestas out this time.

Expect the main 2022 rivalry between the father and son duo of Derek and Michael Graham, from Portadown and the Stewart brothers, Paul and Mark, from Belfast, to reconvene.

As ever, Neville Anderson, from Banbridge and Megan Campbell, from Strangford will be on their tails.

The Roadsports class has a small but top class field.

There are no slow cars or drivers in the line-up. All eyes will be on Steven Larkham, from Carrickfergus.

In his Radical PR6, he has already been knocking on the door of the lap record for these cars, this season.

However, it is his uncle, Jim Larkham, from Newtownabbey, in a similar car, who has been doing much of the winning so far.

Mike Ward, from Youghal, is also in a PR6, as is John Stewart, from Belfast.

Brian Elliott, from Banbridge, had a great run at Bishopscourt, last time out, and he will putting his Radical Clubsport into the mix.

There are two drivers who may well trump everyone else. Ivor “The Driver” Greenwood, from Crumlin is out in a Radical Prosport and so long as it keeps going, he will be a contender.

The other is Arnie Black, from Banbridge, in his rare Mermik.

This car has been very quick in Arnie’s hands and if it is reliable, he too will be in the mix.

Another man, who is sometimes overlooked, is Holywood’s John Benson, who is in the sole Crosslé 37S.

This car may not have the top speed of the Radicals but it has the ability to not let them get away.

The visiting class this time is Formula Sheane.

These single seater cars are as fast as FF1600 and sometimes faster.

The established stars have either moved on or retired, so it will be interesting to see who emerges at the front.

The Superkarts have been brilliant at every meeting this season.

In the 250cc class Aaron Newell, from Ballygowan, has been the man in form.

However, Brian Jones, from Craigavon has been dialing himself in recently and is due a win. Colin Menary, from Bangor, is always a potential winner, as is Liam Fox, from Craigavon.

Add in Alan Witherow, from Bangor, and you have a mighty field!

In the 125 class, Peter Crossen, from Comber, has been unbeatable this season.

However, this time he has opposition from Noel Lindsay, from Hillsborough, Keith Helmsley, from Ballynahinch, Philip Mills, from Dollingstown, Ross Witherow, from Millisle, and Scott Greenaway, from Gilford.

None of these guys are slow, so expect an exciting 125cc race.

The FF1600 class has suffered a downturn in numbers this year but the main contenders from 2021 are still here. Reigning Champion, David McCullough, from Ballymena, will be looking to cement his lead in the 2022 championship.

The Randalstown Rocket, Alan Davidson, who currently lies fourth will be trying to secure second place with a good performance.

Ballycastle driver, Brandon McCaughan, has been racing in England recently and will be hoping to use the experience to improve on his joint fifth position.

Ballymena’s Henry Campbell had a great result of third overall on his last outing and he will be looking for the stars to align again this time.

Trevor Delaney, from Carrickmacross, is making his first appearance at Kirkistown this year.

He is a sharp driver and can be in the mix. Dave Parks, from Ballina, is still driving his boss’s Ray GR20.

He went very well in it in April and is definitely a contender for a win or two.