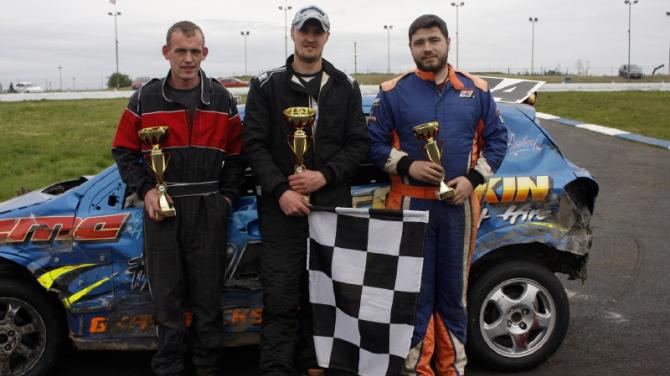 THE traditional Aghadowey Oval May Day Bank Holiday meeting served up some fantastic racing for the big crowd on hand, with all five formulas playing their part in the entertainment.

The Superstox formula are booming at present and they stole the show with some great racing from a huge field of cars.

Jamie McCann from Loughgall grabbed a heat and final double, with Londonderry’s Dean McFarland a delighted winner of the 2.0 Hot Rods final.

The Superstox were simply sensational throughout the day, with 28 cars in action although only 27 made it on track for heat one.

As expected there was action aplenty with hits swapped lap after lap.

Former World Champion Lee Davison came through to land the win ahead of Kyle Beattie and Steven Haugh.

Heat two saw another fantastic race, with Alan Haugh ahead before Curtis Greer took over out front.

In the closing stages Greer and Jamie McCann swapped the lead, before McCann got the crucial hit to take the win over Greer and Ed Davis.

If the heats were good, the final was on a different level with some terrific action and no less than three caution periods.

Steven Haugh again had a spell out front until the final caution period, when a whole host of star names going for the win led to a number of casualties.

From the high drama emerged McCann, to take the flag and complete his double for the afternoon.

Kyle Beattie and Jordan Robinson completed the podium at the end of a fantastic show from the formula.

Gary Thompson was the first to show at the start of the opening 2.0 Hot Rods heat, the Cookstown man leading for much of the distance before being relegated late on by Kris Fitzpatrick.

Heat two saw Dean McFarland set the pace for much of the distance, before he unfortunately tripped over a backmarker with just three laps to go.

That opened the door for Broughshane’s David Kernohan to take a welcome win ahead of Ryan McCrory and Drew McKeown.

McFarland again stretched clear in the final, before McCrory eventually broke free from the pack to chase him down.

A great battle for the lead over the last few laps ensued, with McFarland holding on to take a fine win over McCrory, Grattan and Rochford.Stock Rods

In heat two it was Kilpatrick who took the victory, holding off Rodgers and Johnny Gillespie at the flag.

The final saw Rodgers quickly establish himself out front, and he never put a foot wrong all the way home despite a fast charging Shannon looming in his mirrors.

British & Irish Champion Jonny Cardwell inherited second ahead of Colin McNiece after Shannon was docked in the final analysis for contact.

The Junior Productions grid was bolstered by a couple of welcome Scottish visitors in Koddi Wright and Jack MacLeod.

Callum Doak led the early part of heat one, before Daniel Stewart took over to take yet another win in his great recent run.

Doak and Leyton Hughes chased him home, before Stewart douibled up in heat two with another victory, this time ahead of Morrow and Doak.

Aggregate points put Stewart on pole for the King of Aghadowey final, and he led from flag to flag despite late pressure from star men Sam Percy and Jack Morrow.

Wright came home for a creditable fourth ahead of Callum Magill and Matthew Weir.

As always the Rookie Bangers entertained the Bank Holiday crowd, with William McFaul taking the opener ahead of Gavin Gamble and Reece Pollock.

Stephen Boyd was the man to watch in heat two, racing clear t land the win over John Goligher and Gamble.

The King of Aghadowey final saw Boyd quickly make his escape up front in an action packed race, with Stephen taking the flag ahead of McFaul and Marc Morrell after Josh Goligher was demoted for gaining an advantage by cutting a corner.

The next meeting at Aghadowey Oval is this Friday evening, May 13th, from 7.15pm.