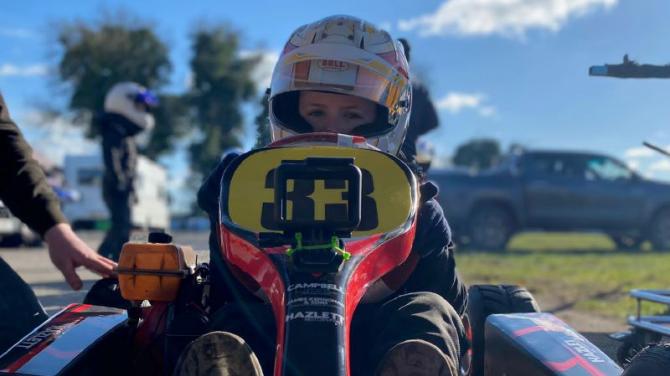 KARTING duo Reuben Kernohan and Lewis Hazlett were in impressive form at Nutts Corner at the weekend.

It was Round 2 in the Ulster Kart Club’s series.

World champion Reuben enjoyed his first race there since October.

Nowadays he races mostly on the mainland, with the BKC Race team.

At the Nutts track the Ahoghill ace won the Pre final to qualify for pole position. And he raced to victory, setting the fastest lap in the process.

Next stop for the Cullybackey College student is Round 3 of the UKC Championship in Wakes.

The lad drove his way to a hat-trick of wins in the Bambino Class for 6-8-years!

Like his uncle Reuben he set the fastest lap, earned pole position and went on to the take the chequered flag.

Congratulations to both drivers.

* In the Keltic Cup both Reuben and Lewis have accumulated enough points to be crowned Champions!