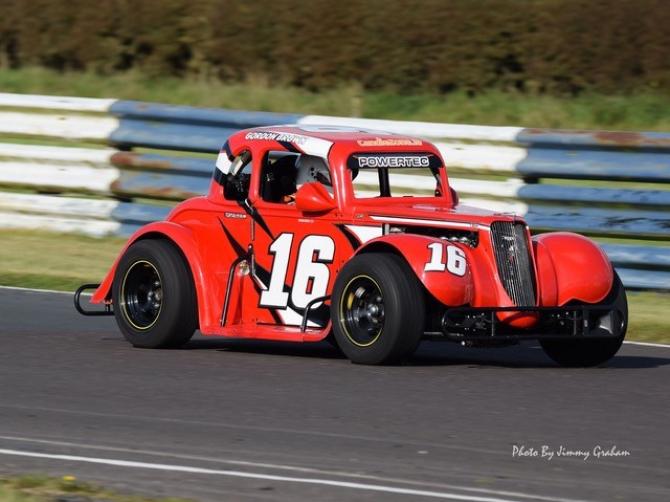 Imagine fourteen 5/8th scale, 1930s American Stock Cars, each with the same 1,200cc engine, competing against each other on a 1.57 mile circuit.
Well, you don’t have to imagine. That is what you will be seeing on Saturday 26th March at the 2022 season-opening car and superkart race meeting at Kirkistown Racing Circuit in County Down.
These cars, collectively known as Legends, will have three fast and furious races at the meeting. The Legend machines have the aerodynamic properties of a brick! That leads to long lines of bump-drafting cars on the straights before they fan out, seeking advantageous lines through the corners.
There are now four of these cars based in Northern Ireland, with our own legend, Ivor “The Driver” Greenwood, from Dundrod being the most famous pilot. Richard Spence, from Ballymena, will be making his debut. Tough competition will come from an unexpected direction. Multiple Emerson Fittipaldi Trophy and Martin Donnelly Trophy winner, Niall Murray, from Dublin, is also making his Legend debut. Niall is always out to win, no matter what he is driving. The regulars, such as the Richardson brothers, Greg and Geoff, from Cabinteely and Clonskeagh, respectively, and Peter Barrable, from Swords will not be making his task easy.
This will be the biggest grid of these entertaining cars ever seen at Kirkistown. They are not to be missed!
More intense and close racing is expected from the wonderful Formula Vee racing drivers, who are bringing twenty-eight cars to the grid! These cars always provide the closest of racing, especially at the sharp end. Usually, any one of eight or nine cars could win, going into the final lap! Many of the regular quick men are back this year. These include Anthony Cross, from Bohernabreena, Jack and Ger Byrne, both from Tinahely, Gavin Buckley, from Dublin and Jordan Kelly, from Buncrana. Keep an eye out for Norman May, from Donaghadee, who is getting quicker.
The Kirkistown Fiesta Zetec class have a fifteen car entry. Interestingly, the current Champion, Mark Stewart, is missing. However, his brother Paul, from Belfast, will be trying to uphold the family honour. All of last year’s top drivers are back, led by Strangford’s Megan Campbell and including Dublin’s Collie Barrable and Banbridge driver, Neville Anderson. The real dark horse is a man who hasn’t raced at Kirkistown in years, Derek Graham, from Portadown. Derek knows how to win championships. He seems to have got the bug again after watching his son, Michael, do so well in 2021. He will not be there just to make up the numbers!
The fastest machines on the day will be the Superkarts. A few of the top 125cc drivers have made the jump into 250cc machines during the off-season. Aaron Newell, from Ballygowan, now has a 250cc Anderson Maverick. Other top 250cc drivers include the evergreen Colin Menary, from Bangor, Richard Dewart, from Waringstown, Liam Fox, from Moira, Brian Jones, from Craigavon, Alan Witherow, from Newtownards, Jonny Adams, from Ballyclare, and lap record holder, Stuart Coey, also from Newtownards.
In the 125cc class, Alan Crossen, from Comber, will be the man with the target on his back. Aiming at him will be Noel Lindsay, from Hillsborough, Ross Witherow, from Millisle, and Philip Mills, from Dollingstown, among others.
The Superkarts, like the Legends, have three races on the day. It is always amazing to watch these machines through the Colonial complex and on into Fisherman’s bend. Their speed and directional change is eye-watering.
The combined Saloons/GTs/Mazda MX5 grid features twelve cars. Fastest should be Stephen Colbert, from Dungannon, in his Ford Escort RSR GT. The Saloon class sees the return of Ballynahinch driver, Ralph Jess, in a BMW M3. His main rival will be Lurgan driver, Peter Baxter, in his Seat Leon Supercopa. The Mazda class will be interesting with Moira driver, Francie Allen, making his Mazda debut. Francie is no slouch! Newcastle’s Eugene McCann makes a return. He is also a very quick driver. Derry driver, Gavin Kilkey, has practically rebuilt his car after a big off in the final race last season. The BMW330i class has entries from brothers Keith and Greer Wray and Clonmellon’s Pete Murray.
The Roadsports class has a healthy fifteen car entry. Making a comeback in his NI Seven is Jimmy Dougan, from Killyleagh. Steven Larkhan, nephew of multiple Roadsports Champion, Jim Larkam, is making his debut in a Radical Pro 6. He has been testing and is certainly on the pace. Niall Fitzsimmons, from Crossgar, is in a similar machine, as is Bangor’s John Stewart and, of course, Newtownabbey’s Jim Larkhan. John Benson, from Holywood, is in his Crosslé 37S. The dark horse here is Ian Leinster, from Belfast, in his super-quick Midget.
The Formula Ford 1600 class has all of the 2021 top contenders returning. Multiple championship winner, from Ballymena, David McCullough, will be defending his 2021 crown. Snapping at his heels again will be The Randalstown Rocket, Alan Davidson. Ballina’s Dave Parks completely rebuilt his Ray GR07 over the winter and found multiple speed sapping issues, which are now rectified. Portadown’s Noel Robinson is making a return, as is Lisburn driver, Chris Paul. However, the driver that everyone is watching is Ballycastle hot-shoe, Brandon McCaughan. From the middle of 2021, he just got quicker and quicker, culminating in a top class performance at the season ending Walter Hayes Trophy meeting at Silverstone. This will be his first outing since then. It all boils down to who can get back in the groove quickest!
As you can see from the above information, the sixteen race programme should keep any enthusiast happy. Qualifying starts at 9:00am with the first race around 11:00am. Entry is £12, with under-sixteens free. 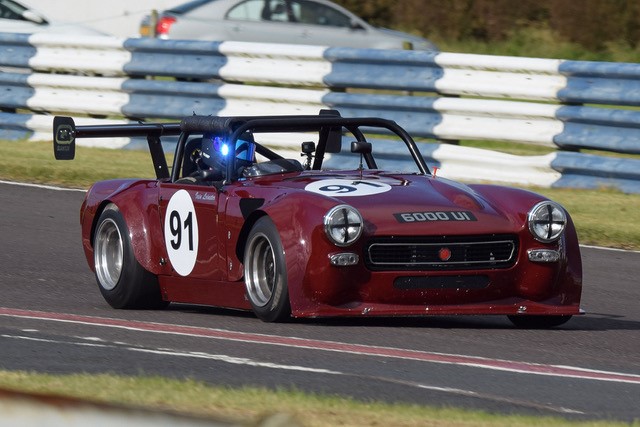