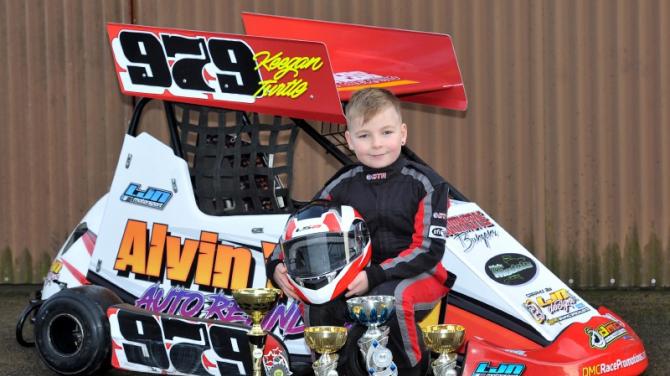 HE must be the fastest ‘Turtle’ around!

For eight-year-old Cullybackey Ninja kart racer Keegan Turtle has enjoyed a few wins - and plans many more in the future.

The lad just loves to race.

And he tells his dad Mark his main aim is to one day race 2-litre National Hot Rods!

But until he is much older he will have to continue to learn his trade in Ninjas, before moving on to some of the other classes - like Group 2s and Stock Rods.

Racing Hot Rods one day is a lofty ambition - but Keegan thinks it is best to aim high!

And he is counting down the days to getting back on track, hopefully in March.

“But his mum reminds him constantly that school work comes first, otherwise he could end up being grounded.”

The young racer won the final last time out at Aghadowey Oval.

In the festive meeting the Ninja Karts field was bolstered by England’s Jack Jones and Scottish racers Kenzie Bell and Tommy Melrose.

The racing was fantastic all afternoon from the 6-11 year olds, with Crumlin’s Riley Dawson-Stirling taking the opening heat over World Champion Leyton Hughes and Keegan Turtle.

Heat two saw Riley take his second win of the day, coming through late to snatch the victory with Hughes and Turtle again the placemen.

The final was a contender for race of the day, with Caolan Fegan setting a blistering pace out front with Charlie Johnston and Turtle chasing hard.

The star men were struggling to get on terms from the rear of the grid, leaving the leading trio to fight it out between them.

Just as he looked to have the trophy in the bag, Fegan hesitated ever so slightly in the back marking traffic allowing the others to close on the run to the line.

It was a real blanket finish with Turtle getting the nod and the winner’s trophy by just 0.042 seconds!

Fegan had to make do with second ahead of Johnston and Hughes.

At that Aghadowey meeting Ben McKee produced an excellent drive in difficult conditions to claim the Richard Turtle Memorial Cup for the National Hot Rods.

Young Keegan is a far out relative of the late Richard, who used to drive an immaculately turned out Anglia Hot Rod - it really looked too nice to be battling it out with the big guns of that time!

The young racer plans to enjoy a couple more seasons in Ninja ranks before moving up a grade.

“We are very pleased that Keegan is so interested in racing,” outlined dad Mark.

“We say that it keeps him off the Xbox, but his mum has reminded him on numerous occasions that school work must come first.”

As well as racing this season at Aghadowey and Tullyroan Keegan will also get the opportunity to compete in England.

Special thanks go to the following sponsors -

And thanks also go to Mo Rainey and ex-World champion, Gary Beggs, for their most valuable input.