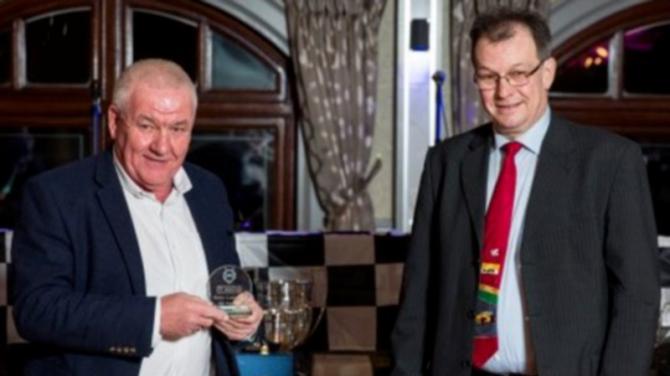 THE Five Hundred Motor Racing Club of Ireland recently presented their awards for both the 2020 and 2021 seasons at The Ballymac Hotel, near Lisburn

With attendance numbers being slightly lower than in previous years, in most cases, only trophies belonging to those present were handed over.

Donal O’Neill compered the evening and began by announcing that Ingo Dohnke, father of Fiesta racer Timon, had made the journey from Germany to lend his support to the event.

As such he had been asked and agreed to present the awards.

The 2020 awards were given out first.

Paul Sheridan, from Randalstown, won the Mod-5-Cup for Mazda MX5s.

Chris Hillis, from Drumbo was 2nd in the Pre-90 and Ballymena veteran, Henry Campbell, was 3rd.

Meanwhile, the 2021 awards were next and once again Alan Davidson, collected trophy after trophy.

However, this time it was the ‘New Kid On The Block’, Brandon McCaughey, from Ballycastle who took 2nd place in the Pre-90s.

Henry Campbell picked up the 3rd place trophy on behalf of Ryan Campbell.

Paul Sheridan took 3rd in the Modi-5-Cup for Mazda MX5s and Megan Campbell took another 3rd place in the Fiesta Championship.

The Marshal Of The Year trophy went to Nigel McCrutcheon.

The award for Rookie of the Year went to Brandon McCaughey.

John Harris, who prepares many of the FF1600 cars, won the Personality of The Year Award.

The audience thought that everything had been awarded but it turned out that Ingo had brought a number of gifts with him.

He gave 2022 calendars to both Donal O’Neill and Richard Young as leading organisers of the 500MRCI and he seemed to have something for everyone connected with the Fiesta class.

He finished by giving a touching speech about how welcome he and Timon had been made to feel by everyone at Kirkistown during 2021.