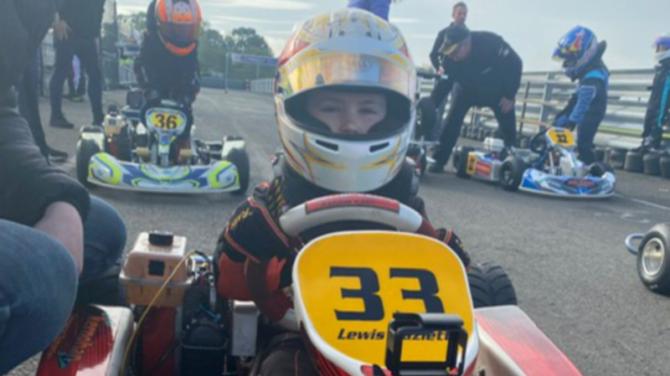 LITTLE Lewis Hazlett finished off his karting season with a double success!

The Groggan Primary School pupil was mixing it with lads much older - but still turned in a five star showing.

Rival Harry McDowell (8) and Lewis battled it out over the laps.

Local lad Lewis, who began karting at the age of five, qualified in fourth spot before going on to victory in the Heat and Final.

It was nip and tuck throughout as Lewis used all his skill to stay ahead of the likes of Harry, Ethan Robinson and Charlie Blair.

In the final Lewis started on outside front row.

Proud mum and dad, Chantelle and Tim, were delighted with his double success in the end of season round.

In his first season racing with The Tullyallan Kart Club in the South of Ireland he showed his potential by finishing runner-up in the Championship.

Lewis is most grateful to his sponsors - James Kernohan and Sons and Graphic Attack - and says a special thank you to his parents for all their help throughout the season.

The 13-year-old was welcomed to a special Reception in The Braid (Town Hall) where he met the Mayor, Cllr. William McCaughey.