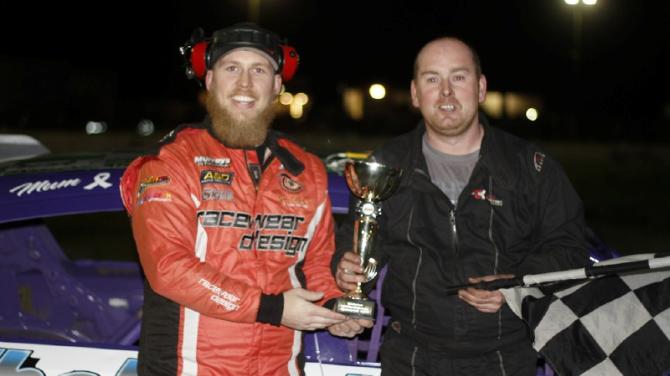 Ballymena driver James Goldie was the toast of Aghadowey Oval on Saturday evening as he claimed victory in the King of Aghadowey title for the Thunder Rods for the third year in a row.

It was a very enjoyable night of oval racing action, with Garvagh’s Johnny McCloy another big winner as he scooped victory in the Grand Final of the 2.0 Hot Rods Hoosier Tyres Series.

Young Leyton Hughes was once again victorious in the Ninja Karts, with fellow Antrim man Stephen McCready the winner in the all-action 1300 Stock Cars.

Nutts Corner racer Mark Crawford rounded out the victors with a faultless hat-trick in the Stock Rods.

Thunder RodsA fantastic entry of 25 Thunder Rods arrived to do battle for the King of Aghadowey title, with Portadown’s Sam Preston the heat one winner ahead of Andrew McLean and James Goldie.

Heat two saw Mark McLaughlin and Jason Darragh battle out front before they tangled and lost out, opening the way for Ricky Bradley to take the win over Chris Baird and Adam Graham.

Ballymena men Graham and Goldie shared the front row for the final, with Graham losing out early on as he ran into mechanical issues.

That left Goldie holding sway out front and he came home to land the King of Aghadowey crown for the third year in succession.

Dean Catherwood just held off McLean after a great battle for second, with Preston and Baird rounding out the top places.

2.0 Hot Rods saw an opening heat win for recent returnee Kris Fitzpatrick, the Lisburn man racing home ahead of Michael Woods and Johnny McCloy in a great finish. Fitzpatrick repeated the feat in heat two for another win, with Davy Kernohan and Woods this time the place men in what was a frantic and action packed encounter.

The Grand Final of the Hoosier Tyres Challenge Series saw McCloy on pole position courtesy of his points tally across the series with Drew McKeown alongside. Johnny controlled the race right from the off, pulling clear to take a fantastic win ahead of Wood and Gary Butler.

As has been the norm of late, the 1300 Stock Cars were spectacular all evening with three superb races.

The bumpers were put to full use, with no quarter given and certainly none expected from the drivers! Gareth Halliday led early on in heat one before Jon McQuillan forced his way past to take the win, with Chris Hamill in third.

Heat two once again saw the sparks flying, with Halliday this time taking victory over Michael Logan and Hamill.

The final really was something else, with places and the lead exchanged constantly throughout the duration. Halliday, Logan and Thomas McCrory all had a spell out front each, some on multiple occasions, but in the final shuffle it was Stephen McCready who broke free to take the silverware ahead of McQuillan and Hamill after a simply superb meeting from the formula.

A number of visitors joined the locals for the Ninja Karts Stars of Tomorrow Challenge, with Christian Murray taking the heat one win over Eevie Ford and Riley Dawson-Stirling.

Murray completed the double with another win in heat two, this time with Ford and Ben Hawe in the places in a race which featured a huge rollover for Charlie Johnston.Johnston bracvely returned to the grid for the final after some great pit work, as

Hawe led the way until a mid race yellow flag closed the field together. Hawe tried his best to hang on, but World Champion Leyton Hughes swept past to take the win and the trophy ahead of Scottish visitor Ford and Ryan Berry.

The Stock Rods once again produced some fantastic racing, but the results were all about former Junior Productions star Mark Crawford.

Mark claimed both heat wins to earn an upgrade to the blue grade for the final, leading home an impressive Mark Foster and Victor McAfee in both races as the star men failed to make any impact.

The upgrade should have made things more difficult for Crawford in the final, but the talented teenager raced clear of his challengers, then outside McAfee and inside leader Foster to complete his faultless hat-trick for the evening. Foster and McAfee again completed the top three.

Racing continues at Aghadowey Oval this Saturday night, October 16th, with the Stock Rods Irish Championship and the latest round of World Series NI for National Hot Rods topping the bill. Lightning Rods, Thunder Rods and Junior Productions will also be in action, with the first race leaving the grid at 6.30pm.