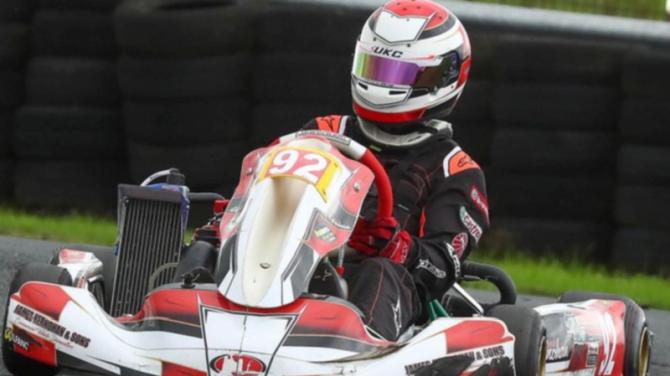 The 13-year-old Ahoghill ace will be in action in the Tillotson sponsored event at WhiteRiver in Dunleer.

Reuben, a pupil at Cullybackey College, will do his homework at Friday night’s testing series.

Then it will be down to the serious business of the qualifiers on Saturday with the actual World showdown this Sunday when be battles it out with 28 other top young racers aiming to bring the World title back to Mid and East Antrim.

Recently at Nutts Corner Reuben raced to third in Heat 1, runner-up in Heat 2 and victory in the final!

Earlier in the season, at the same venue, he won the Irish Grand Prix and was crowned King of the Corner.

And for the second consecutive year the talented teen won the Tommy Rodgers Memorial Cup.

Now he’s getting ready to compete in the biggest race of his career - the Tillotson World show-piece.

The UIster Kart Club member raced all last year in the Mini Max class for kids up to 16 years old.

He has moved to Junior Max.

This weekend the best 4-stroke pilots from Ireland and abroad will compete for the T4 World Cup title in 3 categories.

Tillotson are proud to launch 2 additional categories to this years line up alongside the well established T4 Senior category.