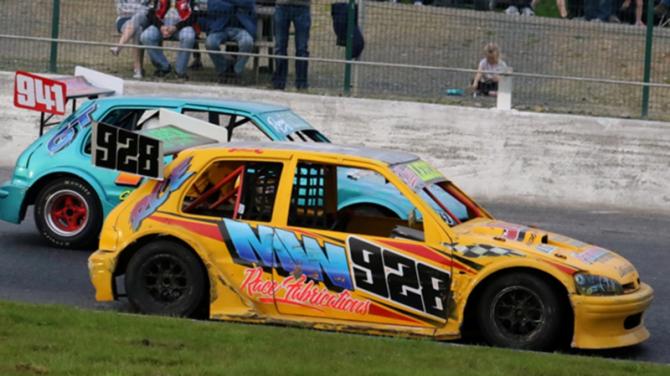 ALL roads lead to Aghadowey Oval this weekend when the 2.0 Hot Rods World Final tops a huge bill of oval racing.

Staffordshire’s Dave Leech tops the entry list in the 2.0 Hot Rods as he defends the World title he won back in 2019. All major titles in short oval racing were suspended for 2020 due to the Coronavirus pandemic.

Unfortunately the Dutch, German and South African entrants who usually take the fight to the UK drivers will be absent, but a full entry of 36 cars from across the British Isles will still be on the grid chasing the right to wear the gold roof for the next 12 months.

Leech has been in fine form of late and will harbour hopes of back to back wins in the World Final, and he will head a strong English contingent. James Morris was a gallant runner up in the recent British Championship and will be keen to go one better, whilst Essex ace Jason Jackson is a former National Bangers World Champion hoping to emulate his glory in the non contact Hot Rods.

Sussex ace Kym Weaver is no stranger to these shores and is another favourite, whilst young London star Mitch Souter has been one to watch on the English raceways of late. Alan Thorndyke and Hayden Ballard will also be on the grid from England, alongside Welsh ace and regular visitor Ryan Morgan.

The Scottish challenge is headed by their National Points Champion Craig Willacy. Gerry Hendry has ran well at Aghadowey in recent years and will be one to watch, whilst Greg Honeyman, Jason Secker, Scott Devine, Ryan Mackie and Marc Honeyman will also be part of the tartan challenge.Ian Riordan leads a four strong challenge from Tipperary Raceway, whilst the local Ulster challenge is headed by British Champion Conor Hughes from Antrim, Bleary’s NI Points Champion Drew McKeown and Aughnacloy’s Irish Champion Adam Best.

Former European Champion Stephen Emerson, and fellow Antrim star Ryan McCrory, will be others in the mix too. From such a quality field any number of drivers could step forward to claim the crown.

The young 6-11 year old stars of the future in the Ninja Karts will chase their National Championship, with Antrim’s Leyton Hughes set to start as a favourite given his recent top form on the home stage.

Oxfordshire’s Finley Kew and Hampshire pair Murray and Joby Hall are amongst the English entry, whilst Scottish Champion Kenzie Kopacz, Hamish Plenderleith, Dougie Kidd and Kenzie Bell will chase the honours for Scotland.

There is also a full support programme planned, with Stock Rods and 1300 Stock Cars in action on the Saturday, whilst the Superstox join the fray on Sunday.Due to Covid restrictions the spectator attendance will be limited – Advanced Tickets are available from www.dmcracepromotions.com