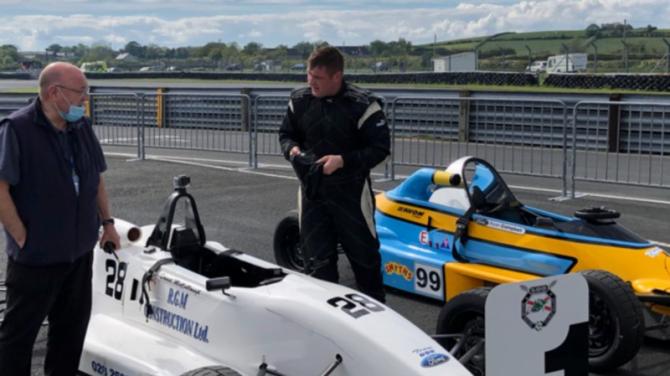 THIS Saturday (June 26) sees the second Car and Superkart race meeting of 2021, at Kirkistown Racing Circuit, County Down.

This time, up to 500 spectators will be allowed through the gates!

There will be an extremely full programme of fourteen races.

The NI FF1600 races should, as always, be closely fought affairs. The Randalstown Rocket, Alan Davidson, will be hoping to make up for a disastrous May meeting, when he crashed out of the first race, sustaining too much damage to continue. David Parks, from Balina, will be trying to go slower to go quicker.

Twice, at the May meeting, he spun himself out of a potential winning place. The man with the big target on his back is current Champion, David McCullough, from Ballymena.

He is currently leading the 2021 Championship standings by 11 points.

This time the GT class is bolstered by a number of visiting Ask Supercars.

These include Alan Watkins, from Bray, Philip Jones, from Rush and Paul Parr, from Hilltown. Dromore’s Mike Johnston makes a welcome return in his latest creation, an MG.

Doubtless, it will out-perform any MG that ever left the factory!

In the Saloons, 2020 Champion, Stephen Traub, from Belfast makes his first appearance this year.

Other than him, it is an all Trackskills affair, with the Wray brothers, Keith and Greer, in BMW 330is and Donal O’Neill, from Nutt’s Corner, in a Seat Leon.

Steve Morris makes the trip, once again, from Welling, to race his Crosslé in the Roadsports. Last time, he had a big moment at Debtors Dip while testing on the Friday.

He elected not to race on the Saturday, in case there was hidden damage on his car. John Benson, from Holywood, will be back out in his Crosslé and Brian Elliott, from Banbridge, will be more of a challenge as he gets used to both his Westfield and the circuit in his first season of car racing. Niall Fitzsimmons, from Crossgar, is also entered in his Radical Pro 6.

Gregory McMillan, from Ballymena, will be renewing his rivalry with Randalstown’s Paul Sheridan, in the Modi-5-Cup for Mazda MX5s. Only one point separates them in the 2021 Championship.

However, Derry driver, Gavin Kilkey has been fettling away at his car and getting the practice miles in, since the May meeting.

He is the 2020 BMW330i Champion, so he knows how to win races. David Cousins will also be at the sharp end.

The Kirkistown Fiestas are well supported, as usual.

Mark Stewart, from Belfast, will be hoping to continue his winning ways. Megan Campbell, from Strangford, usually starts the season quietly before coming on stronger in later meetings.

She had two fifth places at the May meeting. Expect more this time.

In May he donated his car to Timon Dohnke, from Germany, when Dohnke’s gearbox exploded.

Hopefully, this time, he can get two races! Neville Anderson, from Banbridge, will be hoping to add another win and the aforementioned Timon Dohnke makes the trip from Germany again.

The Legends make a welcome return. These 5/8th replicas of 1940s American Stock Cars, powered by 1250cc Yamaha engines, have all the aerodynamic properties of a brick!

That makes for very close and exciting racing, with long lines of cars slip streaming along the straights.

Northern pride will be shouldered by Dundrod Legend, Ivor ‘The Driver’ Greenwood and Ruari O’Down, from Portadown.

However, they will have to overcome Robert Barable, from Swords and Derek Hogan, from Dublin, among many others.

The Superkarts return again this time. These incredibly quick machines always put on a wonderful show.

In the 250cc class, keep an eye on Bangor veteran, Colin Menary, Comber’s Stuart Coey and Lurgan’s Richard Dewart, who is getting well up to speed, following a scary accident towards the end of last season.

In the 125cc class, watch out for Aaron Newell, from Ballygowan and Noel Lyndsay, from Hillsborough.

Both of these drivers will be trying to keep Comber driver, Peter Crossen, off the top step of the podium, as will his brother Alan.

Qualifying starts at 9:00am with racing getting under way around 11:00am.