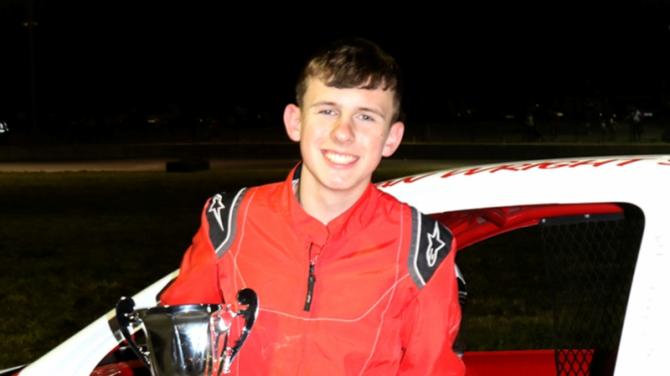 CRAIGYWARREN Stock Rod star Micky McFall has tasted plenty of success in his racing career, and raced against some fierce rivals on the local circuits.

But now he is facing up to the stiffest opposition he’s ever encountered – his 16-year-old son Adam!

Micky, who first ventured onto Ballymena Raceway in the Junior Rods class when still at primary school back in the 1980’s, has been a star name on the local racing scene for many years.

A stalwart of the Stock Rods division, Micky was crowned National Champion at Hednesford in England in both 1999 and 2014, and also raced to Irish title success in 2010.

But in recent years he has also been schooling his son Adam through the junior formulas.

Adam took to the tracks at the tender age of just nine when the Ninja Karts were introduced to the DMC Race Promotions circuits at Tullyroan and Aghadowey back in 2013.

The Dunclug College pupil soon picked up his Dad’s winning habits, and raced to NI Points Championship success in 2013 and 2014, as well as a big victory in the Stars of the Future race at the prestigious Ipswich Spedeweekend in 2014 against the UK’s best drivers.

Adam then moved up to the Junior Productions formula in a Vauxhall Corsa, where his skill quickly became apparent once again as he racked up victories in both the Irish and Irish Open Championships in 2018.

He turned 16 back in April, but due to lockdown he had to wait until August to hit the circuits in the senior ranks, joining his Dad in the Stock Rods in a brand new Vauxhall Corsa.

On a fairytale debut he swept the boards on his first night out in the competitive formula at Tullyroan, winning all three races!

As more good results came his way, Adam was pushed further back on the starting grid at each meeting, but he still kept racking up good finishes and sensationally leads the way in the 2020/21 NI Points Championship at the half way stage.

And all that despite racing week in week out against the likes of World Champion Derek McMillan and other formidable major title winners like Marc Morrell, Stevie McNiece, Bobbie Johnston, Victor McAfee, Jonny Cardwell and Shane McMillan!

“I couldn’t be happier with how things have been going. It’s been a steep learning curve as the cars are faster and handle so much better than what I was used to in Junior Productions, but I’m really enjoying it” Adam told Guardian Sport.

“But the experience in the Juniors stood me in good stead as it’s the perfect place to learn your trade, as a lot of the car suspension and set-up is similar.”

The man behind much of that success is Adam’s father Micky.

“I’d be lost without him and his help with building and working on the car and everything he does for me. To be honest I almost feel bad, as I know that he spends so much time on my car that his own racing is suffering.”

Micky admits that it is difficult with two cars to run at each meeting.

“It is tough, especially as we both like the cars set up differently. From his Ninja Kart days Adam has always left foot braked whereas I’m more conventional with the right foot. It gives the cars a different balance and means we both have our own set up. It makes it a big task but these days I just love working on the cars, tinkering with the suspension set ups and the like, as much as racing them,” outlined Micky.

“We’ve just started to build a new Vauxhall Adam for next season, which I will enjoy developing along with Adam. They are a new model to the Stock Rods, and we hope to be able to get an edge over the usual Corsa’s by getting one out on track first. We’ll both enjoy the winter building it together.”

Despite much of the McFall team’s focus being on Adam, and his appropriately named new Vauxhall Adam, for next season, Micky isn’t ready to retire just yet.

“I think I’d miss it if I stopped. I missed it over lockdown and I really enjoy the social side of the racing. For many that’s what it’s all about. I’d love a Classic Hot Rod at some stage too so we’ll see what comes of that, but I won’t be hanging up the helmet just yet,” he quipped.

And as for Adam, his tremendous graduation to the senior ranks has made headlines across the UK.

“I’m loving it, and in 2021 I’ll be chasing all the major titles that are up for grabs. Eventually I’d love to race a 2 Litre Hot Rod or maybe an F2 Stock Car, but for now I just need to keep my head down and concentrate on winning in the Stock Rods.”

The McFall father and son will be ones to watch on the local oval scene in 2021. Adam is most certainly a champion of the future, but don’t rule out the experienced Micky when the big titles are up for grabs!