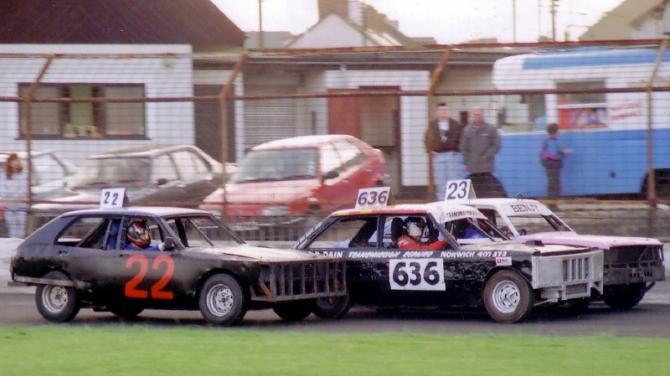 It will be 29 years ago this August since the young Broughshane girl blew the quality opposition apart to take the coveted crown.

And speaking to Guardian Sport this week Heather said she would return to the sport tomorrow - if she had the finances!

“I still have the appetite for car racing but would not have the money to be able to return, as obviously priorities change in life when you have a family of your own. I really loved racing all those years ago, and I still do, the passion for racing has never left me" she said.

Talking of family, Heather proudly spoke about some of the biggest achievements of her life being when she had her daughter, and when she rescued her many animals, another strong passion in her life.

Heather spoke with great pride , as she described the feeling of being able to take her daughter, Daisy-Grace, to watch the Stock Cars at Aghadowey, the venue at which she had won that Championship all those years ago.

The ex-racer recalled how excited Daisy-Grace got as she watched the cars fly around the track.

I asked Heather what other highlights she had added to her list since her Stock Car racing days?

Unsurprisingly this female adrenaline junkie has abseiled for charity, parachuted, raced yachts coming third in the Championships as part of an all female crew, and can be found buzzing around the countryside with her partner, former member of Belfast City Breakers, a famous breakdancing crew, on some of the seven motorbikes they have between them in their garage.

Open success was talk of the town

Heather’s stunning Irish Open success was the talk of the town, and much further afield, back in August 1991.

I covered the story then, and this week it was a delight to speak again with the former champion.

I remembered back then that a sneak thief had stolen Heather’s racing helmet - and she had to borrow one so she could compete.

“No, I never did get the helmet returned,” laughed Heather, after I reminded her that Guardian Sport had put out an appeal for the item to be returned.

Why Heather selected the Stock Saloon class I will never know.

In those days it was the meanest, roughest, toughest class around.

The cars were built like, and resembled tanks, and out on the track it was every man, and in this case woman, for themselves.

But petite Heather mixed it with the best and as she proved on that evening at Aghadowey Stadium had the ability and class to take top honours.

English ace Conrad Self had been blazing the victory trail on the mainland and came across to Northern Ireland thinking he would add the Irish Open title to his lengthy list.

But Heather, in her flying black and red Mazda (No. 22), had other ideas.

She won numerous other races including King (or in her case Queen) of Aghadowey!

There were many other classes Heather could have got involved in - but it was Stock Saloons which was her choice.

“It was the Class that give me the biggest buzz,” she recalled.

“Going into the corners you knew you had to have everything right, otherwise you would have been taken out, and sent smashing into the wall.”

Seems a rather rough sport, but Heather thrived in it, and was involved in the odd spill or two, picking up knocks, bruises and injuries along the way.

It was attending a race meeting with a boyfriend at the time that first got Heather hooked on racing.

“I told him rather than watching I would much prefer to be racing,” she recalled.

Little did she know that sometime later she would be behind the wheel hurtling around the tracks!

She marked her debut with a third place.

Her racing also took her to Tipperary where she more than impressed.

And of course neighbouring Aghadowey Stadium holds many precious memories - highlighted by that Irish Open Stock Saloon title success in 1991.

On that race night Heather left the quality opposition red faced by driving to the coveted title.

It was a brilliant display which had the whole of Aghadowey Stadium cheering her on to the deserved victory.

It was fairy-tale stuff for Heather and helped make up for the disappointment of having her racing helmet stolen the previous night at Ballymena Raceway.

Speaking to her in the pits prior to her remarkable achievement Heather said she “was looking forward to the big race.”

Considering the opposition included numerous hit men from England and Scotland was she not worried about her safety?

“I expected to be roughed up a bit. But luckily that did not happen. I still cannot believe I won the title," she smiled at the time.

Her new Mazda was naturally looked upon as being an instant hit.

It was built by her then boyfriend and former Hot Rod driver and she only got testing it at the heats the previous night in Ballymena.

Heather, a very popular driver at Raceway, took front row in the grid for the Irish Open.

And she led from start to finish, beating top English driver Conrad Self for the title.

Imagine Self explaining back home that a lady had pipped him for the crown!

The Guardian Sport report at the time continued -

Self came to the Province keen to continue blazing the glory trail. He collected three impressive titles prior to taking the P and O Ferry to Larne and his first and second in the heats at Ballymena suggested the result at Aghadowey would be a formality.

The Englishman did well to catch right up with Heather a couple of laps from the end, and it looked as though she was going to lose out on the title.

But she kept her trusty Mazda ahead and although Self was right up behind her he could not get past.

The fair sized crowd stayed right until the end to see Heather getting presented with her award.

The spectators really got behind her. They all wanted to see her win.

'Go on the girl you' shouted one eager young gentleman. 'Keep her lit', screamed another.

When Heather sped over the finish line the stadium erupted.

A woman had won the Irish Open title - on the day her home village Broughshane was named 'Best Bloom in Ulster'.

Heather was the only NI driver to scored points in the Heats taking sixth and first.

The race ace had a few outings at Raceway towards the end of the last season..

But this was her first full season at the town track.

No doubt she will keen to take a few more awards this time round - but knowing Heather she will be turning her thoughts towards the 1992 European Stock Saloon Championships which are taking place in the Province.

The Heats were scheduled for Ballymena Raceway with the final at Aghadowey Stadium.