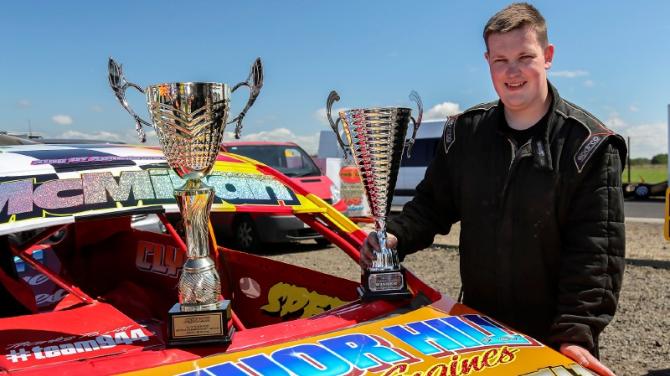 The 25-year-old former cancer patient has been off work since the end of March.

“I want to take all the precautions I can at these worrying times,” he told Guardian Sport.

“I have been staying at home and doing a bit of work in the garage, tidying and getting all those jobs which needed sorted done, and had no time to do them before.”

McMillan had an absolutely brilliant 2019 race season - made all the more remarkable by the fact that he had to sit out the entire previous season due to having cancer.

And the talented driver, who fought and beat that disease, makes it clear that proper procedures must now be carried out as the fight to beat this coronavirus continues.

“This is a hard and very stressful time, and I know people have been worried and are up tight about no social gatherings,” he told Guardian Sport.

“And I miss the racing so much too, but it is important we stay at home and help out the NHS, who I must say deserve all the credit they are getting. They, and other frontline workers, are doing a brilliant job.”

The Hot Rod ace recalled his own personal experience of the NHS and said - “They really are heroes without wearing capes!”

McMillan had major plans for 2020.

He had acquired a brand new car, built by familiy friend Alex Hunter, and a brand new engine, built by Ballymena engine builder, and great friend, Trevor Hill, with the aim of retaining some of his title haul from last season.

“I was so looking forward to having the new car, and the new season. But it is not looking likely we will get too much racing,” said a dejected McMillan.

“And last year I put the most effort I have ever put in as I wanted to come back with a bang from missing 2018 season,” he told Guardian Sport.

“I suppose I can’t complain,” he summed up.

World champ McMillan had planned to take in as many meetings as possible in 2020 - until Covid-19 put the brakes on all things sport.

“We were aiming to qualify for all the major championships again. And this year we intended to go to Holland to compete in the first running of the Dutch Open,” outlined McMillan.

Racing is McMillan’s life; without it he is lost, but he tries to keep up his interest .... on-line.

“Yes, I’ve been online racing Stock Cars like you’ve seen fellow racer Ryan Wright has been doing too,” he said.

A couple of weeks ago Guardian Sport featured Cullybackey man Wright, who went on to win the Irish Saloon Stock car championship without having to leave the comfort of his living room!

“Our business is currently operating. The only thing that is missing is its main employee - me!,” quipped McMillan.

The top racer put all his time into the sport, spending every week night in the garage “playing about at something on the car.”

“Hopefully we can all get back to it as soon as possible,” said McMillan.

He won the European Hot Rod crown at Aghadowey Stadium.

McMillan was back. And back in style and believed there was still more in his tank - and how right he was!

Speaking to Guardian Sport at that time McMillan said it was such a relief to have been given the all-clear.

The Stock Rod ace was first disgnosed in February 2018.