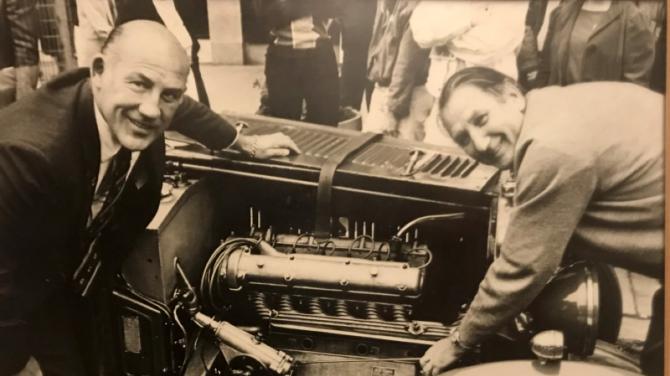 That was back in 1985, Guardian Sport can reveal.

A couple of years previous Moss’s navigator Denis Jenkinson had viewed Mr. Templeton’s car collection, and recommended his driver should do the same, if he got the chance.

As it happened 35 years ago Moss did get the opportuntity, made the trip from the City to the Templeton Garage at Pennybridge in Ballymena and was able to view the impressive range in the collection.

The photograph (right) in Guardian Sport shows Stirling and Malcolm, a former racing driver himself, looking at the engine of a 1929 Alfa Romeo 1750 - understood to have been driven by Campari in the Ulster TT at Ards.

Last Sunday Sir Stirling Moss passed away at his Mayfair home, with wife Lady Susie by his side. He was 90-years-old.

Sir Stirling was regarded as the best driver not to have won a Forumula 1 title. He finished runner-up on four occasions and was third three times. And he was Britain’s first professioinal racing driver.

Sir Stirling was also the first Brit to win a home Grand Prix at Aintree back in 1955. He won 16 GPs from 66 starts, a record for an Englishman until 1991.

Also in 1955, along with navigator Denis Jenkinson, he won the 993 miles 22nd Mille Miglia in a Mercedes-Benz 300SLR.